Secrets of Crete Tours Discover the navel of Crete: the mystic Agios Thomas

Secrets of Crete Tour Discover the navel of Crete: the mystic Agios Thomas

Agios Thomas (or Saint Thomas) village is deemed to be the very navel of Crete. Dismiss the claims of nearby Agia Varvara! With its 38 churches (!), numerous Roman tombs, rich history, myths and legends it leaves a jolt of untamed even chilling yet absolutely unique, somewhat magic and an epic place. Cleary, an important worship centre in antiquity, it is one of the most mystic places on Crete, arousing the explorer's spirit in its visitors. With quite few travellers having passed the area, there are still secrets to discover. Villagers know to tell about stairs leading underground that none has managed to climb down, associated with myth of Persephone - the Goddess of underworld. Located in the very centre of Crete, Agios Thomas village is surrounded by a farming landscape, olive grows on the hillsides, fascinating rock formations and ancient vineyards - a gorgeous view that truly 'feed one's eye'.

So here are some of the absolutely must-do and must-see things in Agios Thomas !

How many other villages do you know that would have that many churches and chapels? I am not sure if Agios Thomas with the number of 38 couldn't make the case for the Guinness World Records. The most beautiful and visible one stands in the centre of the village - the three-aisled basilica of Agios Thomas. It is not quite clear how comes the village has that many churches. Not all have survives -  today Agios Thomas has only 15 of them.  Just walk the alley of the village to reach, for instance,  Michael Archangel chapel that features some mural fragments form 12th century. There have been many changes and adjustment throughout the history - likewise the rest of Crete, Agios Thomas has a period of Byzantine, Venetian era during which Agios Thomas was rather a vibrant town and Ottoman rule that put a big stop to the past development and prosperity of the village. 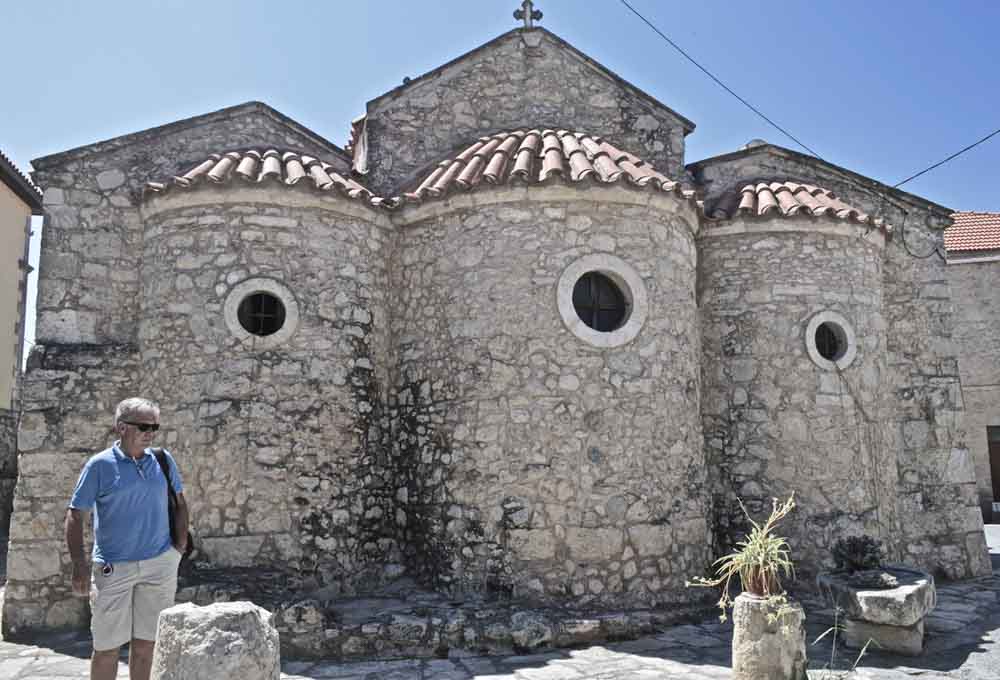 Three-aisled church: the two aisles date back to the 10th century and the third was built in the 14th century 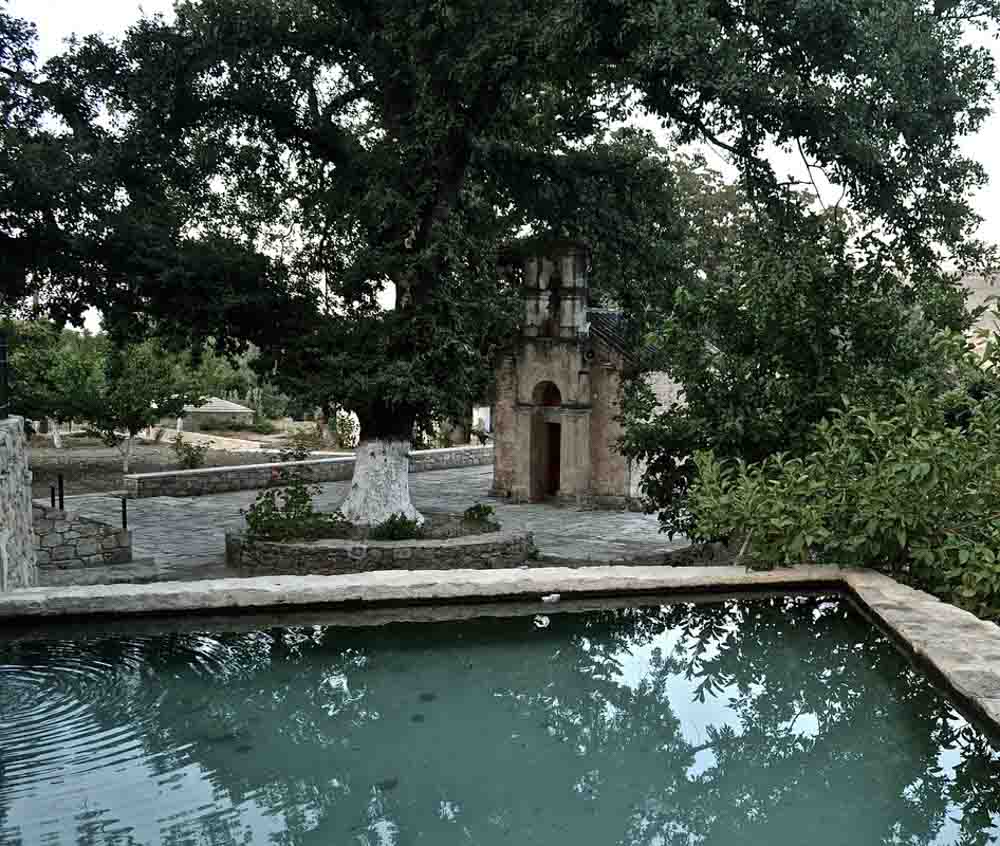 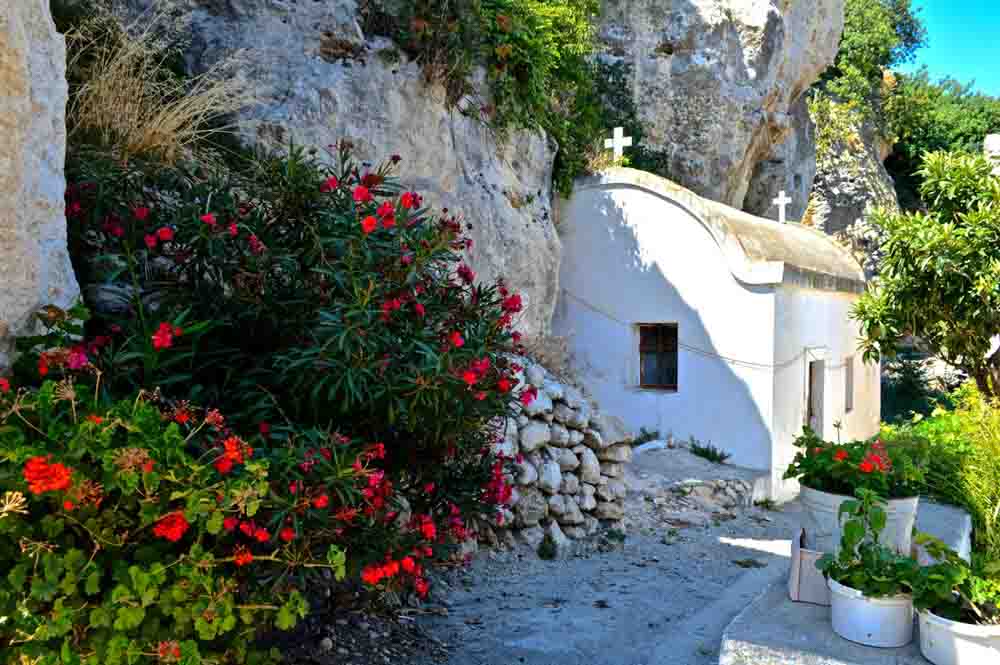 a chapel in a village, clinging to the rock

Undoubtedly, the greatest treasure of Agios Thomas are its people - the few met, like Maria and Evangelia are the reason why part of my heart has now stayed in the village. If you are lucky you might meet also Panagiotis - the priest of central, beautiful and historic Agios Thomas church, a very kind and widely respected person. He has served for 35 years as a priest and has lots of stories to tell about the church (the changes it has undergone throughout the history), the very village and the area. I was the audience in a single person and he took his to tell, to discuss, to listen ... What a privilege! 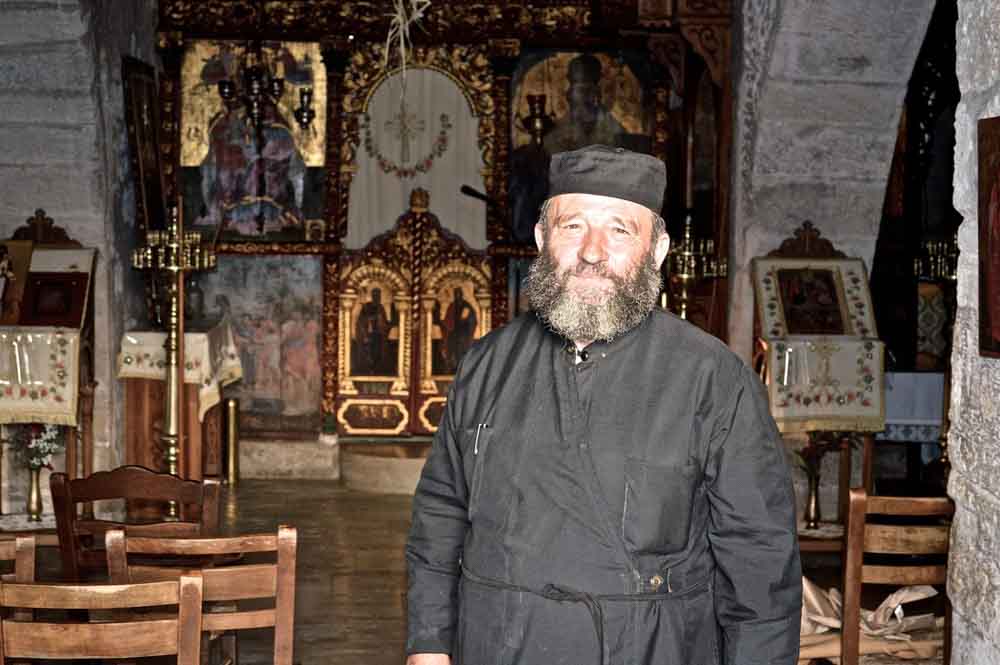 It is a three-aisled with dome church and it was built upon an ancient temple. The two-aisles date to the 10th century and the third to 14th century. The church was full with frescoes which ruined by fire. However, where frescoes have survived! 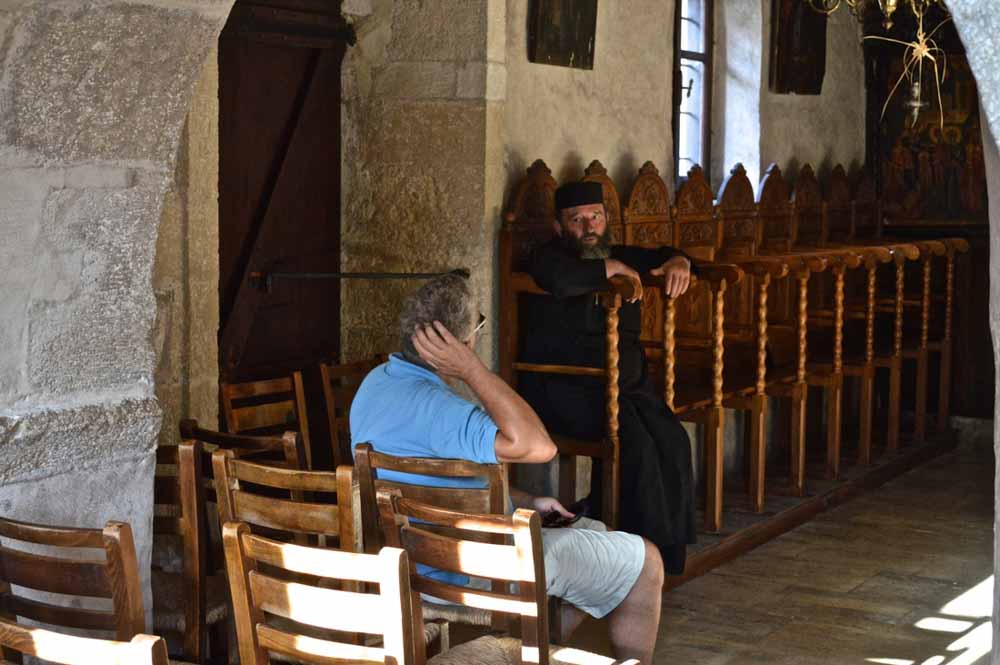 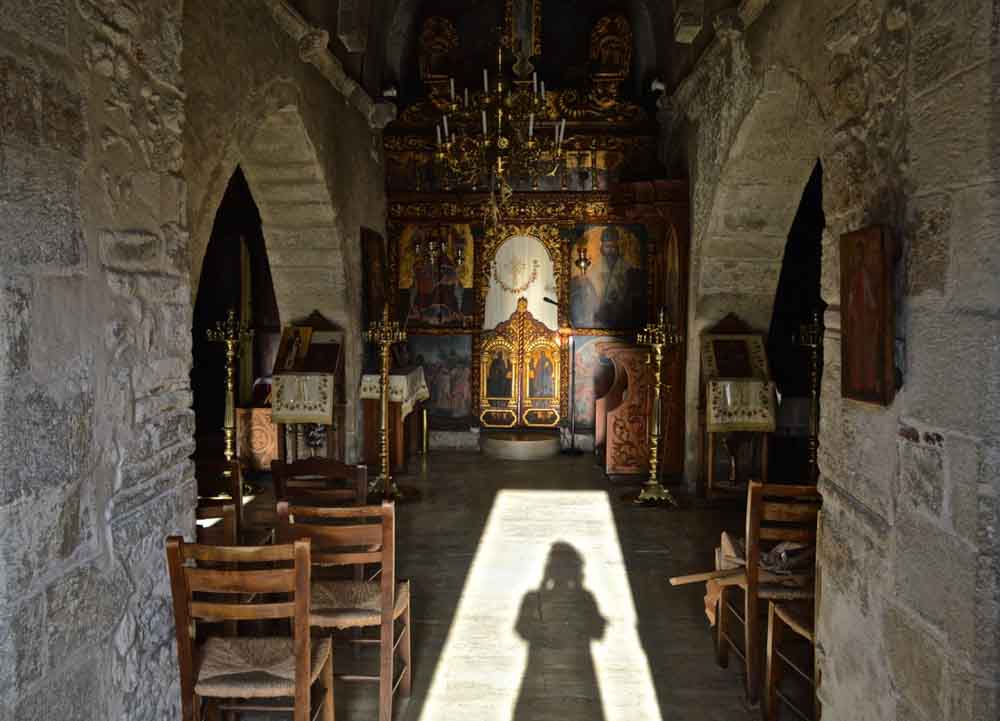 Explore the tombs and sanctuaries - just like Indiana Jones

There are about 30 tombs around Agios Thomas from the Roman era of the island. If you are not up for exploring all of them, you can take a look at six of them in the very heart of the village. Right next to the monument of the village personality, called Logios the stone paved pathway leads you up the hill. The sign says "Gria Mantra - Greek Roman carved graves with many burial places below ground". However, the mysterious tombs are older than 2000 years and date back to prehistoric times, when most likely they were used as dwellings. 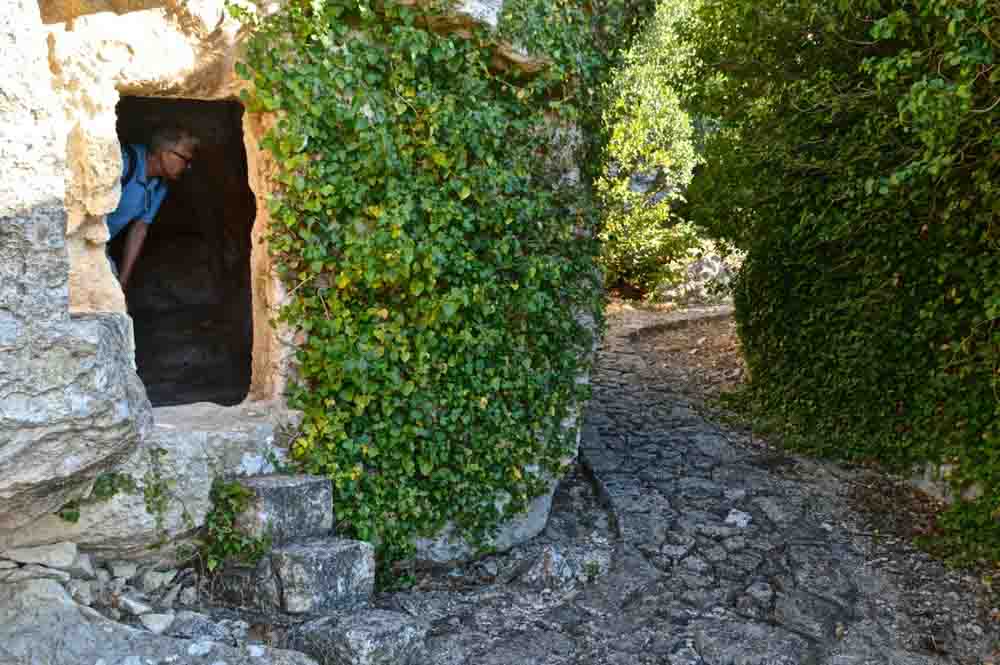 Just another unique example is the sanctuary of Kera Spiliotisa built within a cave of the mountain. Now a chapel, it clearly has the pre-Christian origin. Right next to is an ancient Greek inscription. The sign there says that the sanctuary "hides hole where dead people's personal things are thrown" which, according to locals, is a "hole to the hell" and has a link to the myth of Persephone - the Goddess of underworld. 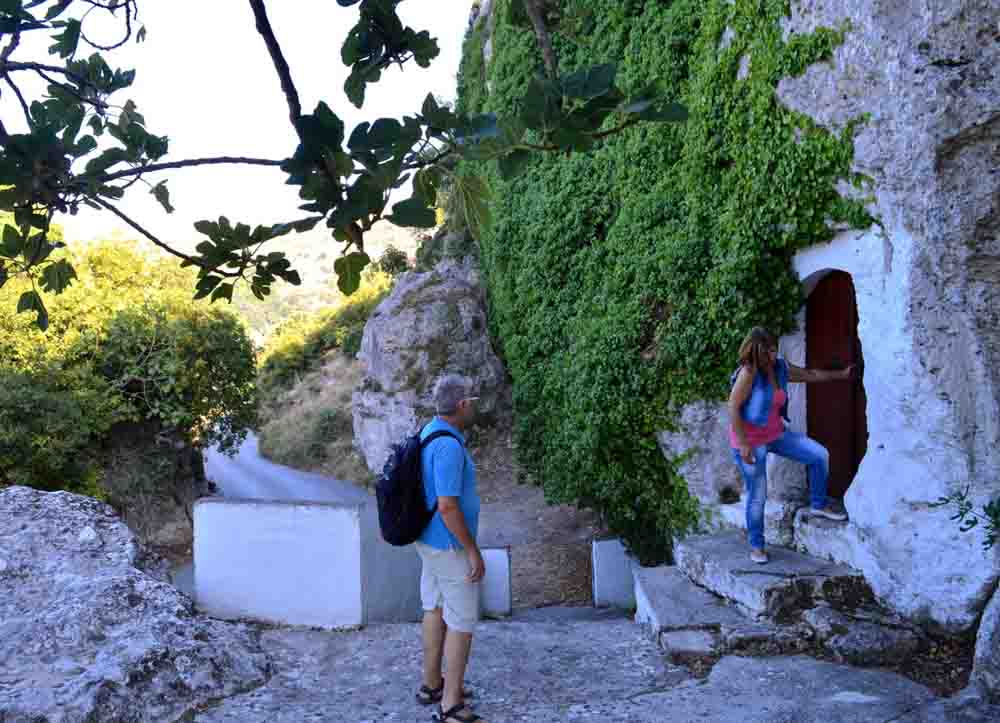 ‘Kera Spiliotissa’ (Lady of the Cave), dedicated to Virgin Mary 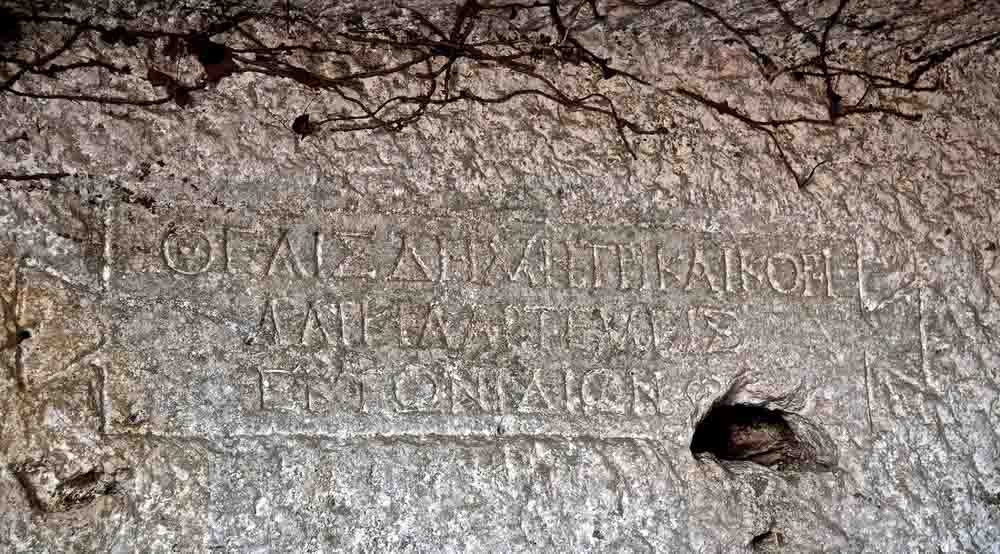 Ancient Greek inscription next to Kera Spiliotisa. This carved inscription dates back to the 1st century AD, in Roman times, and implies that here was a sanctuary dedicated to deities.

Hey, how did the Saint from India end up in Crete?

Well, it remains mystery how exactly the worship of a Saint from India - Joasaph (mind you, it is not Joseph!) reached the Cretan village of Agios Thomas in Mediterranean many centuries ago. The thing though is - right here in Agios Thomas one, following the obscure, forgotten path, reaches one of the very few sanctuaries in the whole world devoted to this very Saint from India. The story about Joasaph's life bears a striking resemblance to that of Buddha ...

Who could imagine the tiny village of Agios Thomas has any relation to India? But that's by far not the only secret this village harbours. Soon after Saint Joasaph was forgotten along with his temple and only in recent years its existence was re-discovered. It is believed that the sanctuary of Saint Joasaph was built on the the site of an ancient Greek temple, the ruins of which are still around the courtyard.

It seems that Agios Thomas is like Pandora box of ancient myths and legends - once you discover it and open, it doesn't stop surprising you. 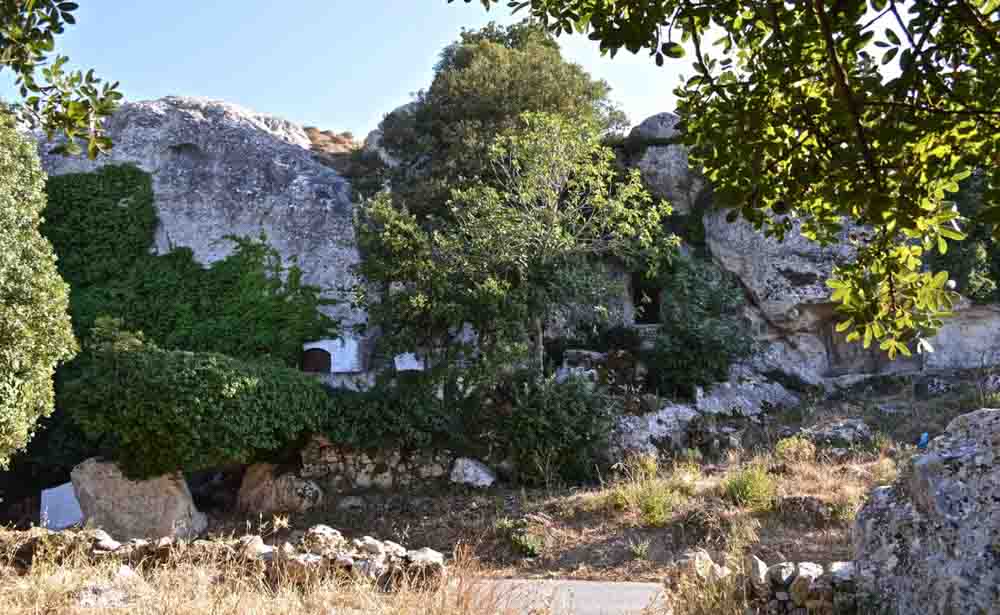 Jump in the shoes of a Cretan Indiana Jones and explore the tombs, forgotten sanctuaries carved in the soft rock and ancient inscriptions.

A well-brewed Greek coffee or mountain tea in "Ksobli"

If Agios Thomas is deemed to be the navel of Crete than ‘Ksobli’ is a very navel and centre of Agios Thomas - located just in front of beautiful church of Agios Thomas this is a traditional cafeneio - rakadiko (mmm, what a wonderful herb-infused raki you get there after the lunch!). Run by beautiful ladies of two generations - Maria and Evangelia, it is like an oasis for tomb-tired explorers. There is no better place to observe how the pulse of the village beats during the day that the cafeneio - laid back, relaxed villagers that look for share come here to enjoy a coffee or raki. Simplicity if the keyword. However, if you are hungry ones can get kouneli (rabit), potatoes salad, beetroot salad, keftedakia (meat balls) or whatever is available at the moment! Thirsty ones can taste a very unique herbal raki (trust me, after that many raki tastings all over Crete). Traditional yogurt with spoon sweet comes after. 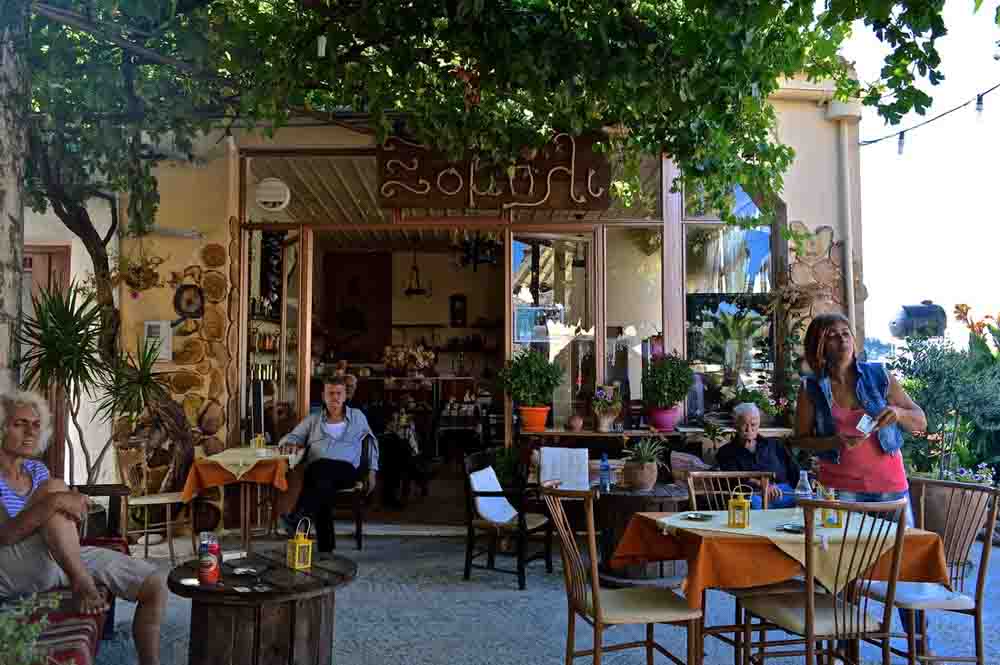 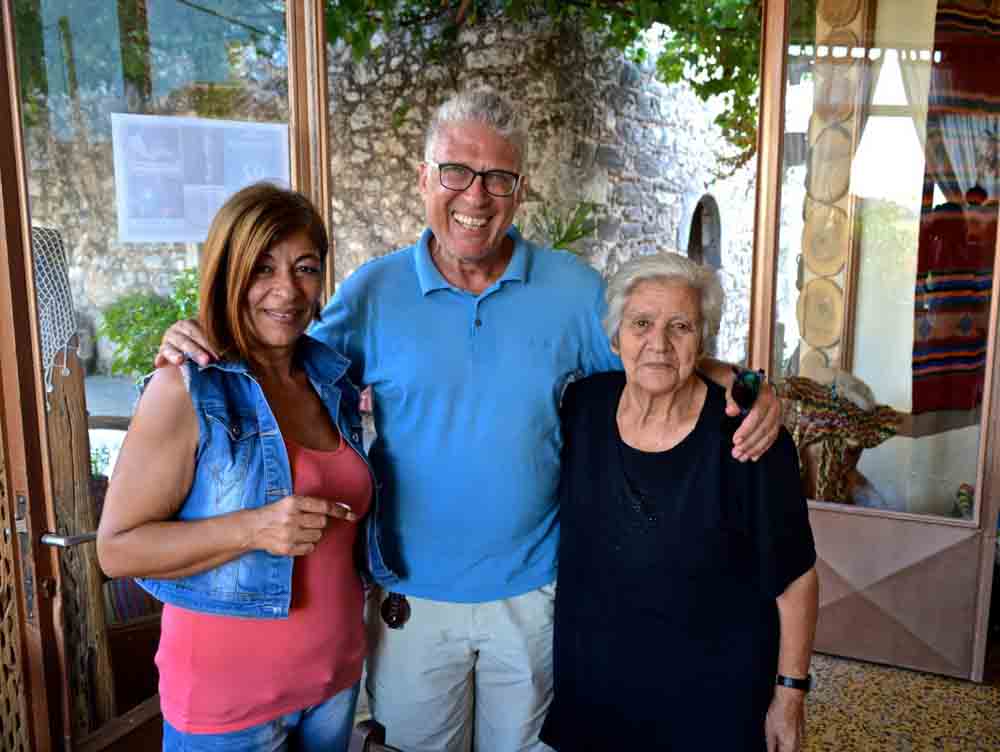 with Maria and Evangelia 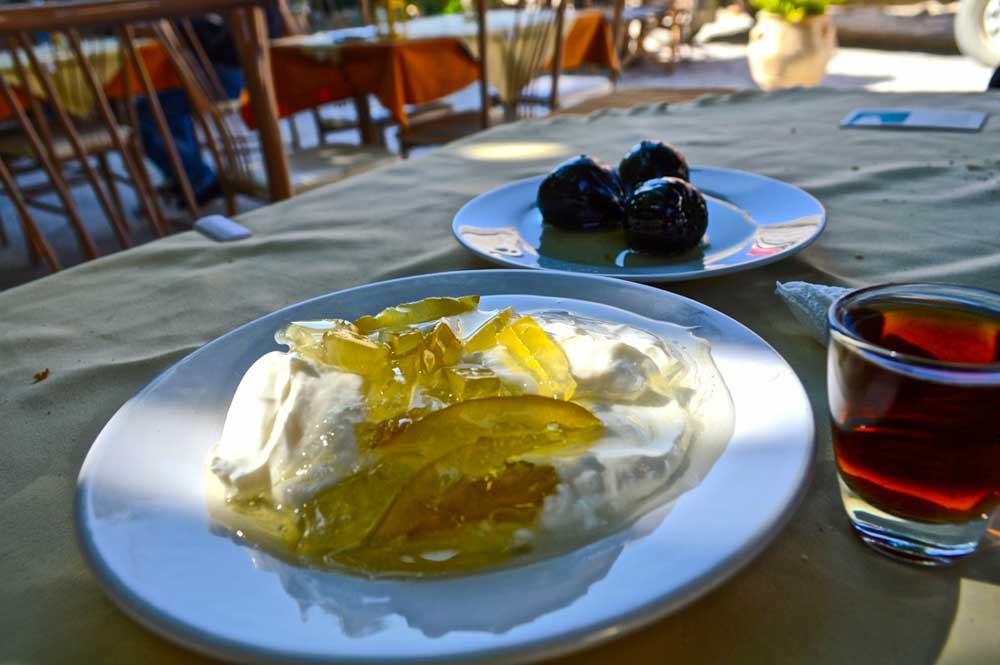 There is much more to the village such as two great personalities, heroes and source of pride that have been born in Agios Thomas - Kirikas Chairetis Kalamaras and the empirical doctor and fighter Logios. Than there is the abandoned, ghostly village just right next to Agios Thomas which, according to villagers, has been left by locals because of the falling rocks. You might also want to find out about the Minoan presses next to the village and many other things.

The other must-see thing in Agios Thomas is the 'Kohlius Vradi' or, so called, Cretan Snail Evening/ Festival. Likewise everything else in Agios Thomas, the 'Kohlius Vradi' is fairly unique celebration of delicious snail dishes. Read here our blogpost about the snail festival. In 2014 it took place on 2 August . Apart from this event, there is amalgam of other ones, hosted by Cultural Community of the village.

As you leave the village you can see, so called 'Rider' - the legendary hallmark of the village - two huge rocks that support a third. 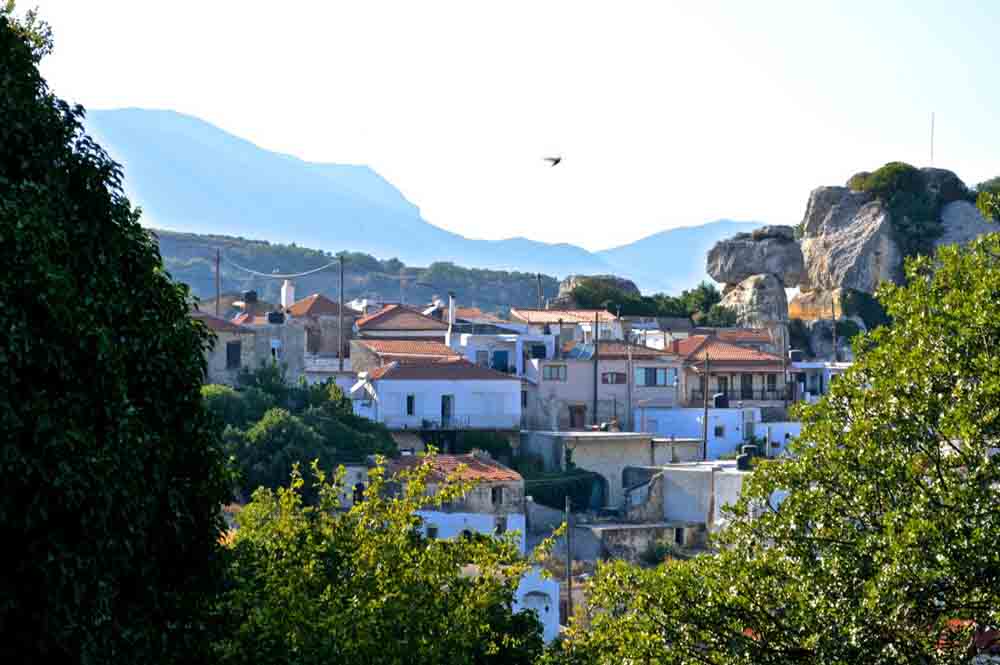 Leaving the village. 'Rider' on the right sight of the image 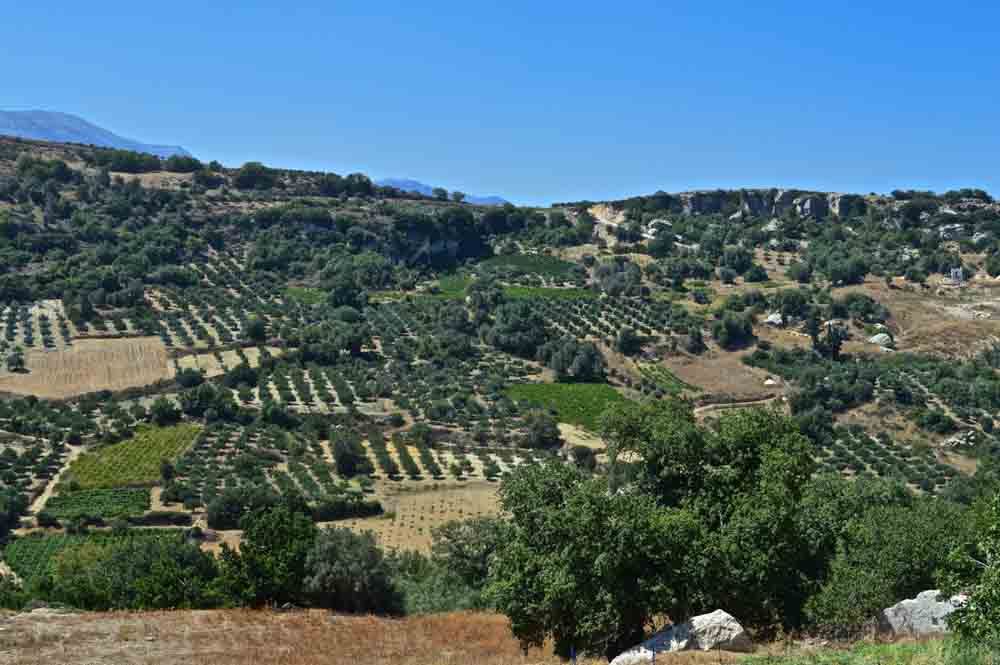