Excitement of discovery, stunning beauty of nature, revelation of some of the Crete's well kept ancient secrets and healing power of the sanctuary, all come to live and manifest in one place - ancient Lissos. Ancient Lissos is likened to Crete's lost city - in the heart of nature on the coast of Libyan sea, it can be reached only on foot or by boat from Sougia, West Crete. 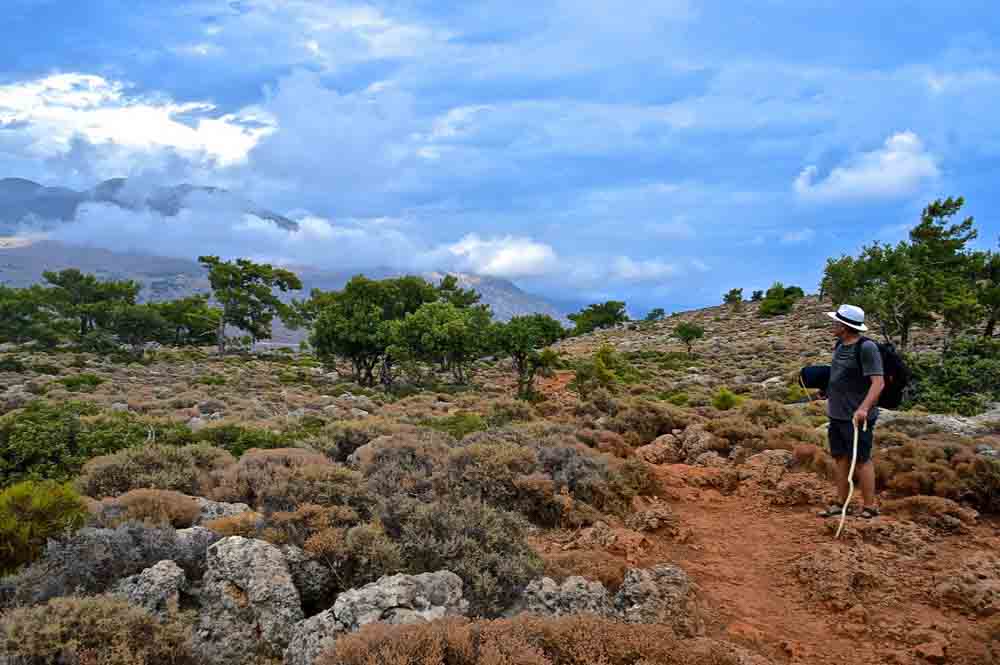 The story of ancient Lissos

The area that is a beautiful valley in the mid of mountains was largely unexplored until 1957, although the position of the ancient city was known. That year one of the locals, wishing to find the source of the water, dug exactly on top of the sanctuary of Asclepius and found about twenty statues portraying Asclepius, Hygeia, Pluto and a few devout patients. Fortunately, it was not an illicit dealer but a lover of antiquities, so he informed the Nikolaos Platonas, who immediately started an excavation of the area.

It is known that Lissos (as well as Syia) was the harbours of the city of Elyros, the most important ancient city of the area. It was established in the Classical period and flourished until the Late Antiquity. Its name was made certain by inscriptions. The early history of the city is unknown. Based on inscriptions and coins of the 3rd century BC, it is  know the city allied with King of Carthage Maga, and joined the League of Oreians. Lissos had powerful trading and fishing navy. Most of its inhabitants were sea merchants and fishermen, but the greatest source of wealth was from visitors coming to  a religious shrine of the healing god Asclepius with a famous healing water spring. So wealthy was Lissos, it even minted its own golden coins. Coins of the 4th-3d c. and the treaty of the Oreioi with King Magas of Kyrene indicate that the main divinity of Lisos was Dictynna, but excavation has now revealed an important Sanctuary of Asclepius.

Remains have been found of an aqueduct, a Roman theater only 23.4 m in diameter (that has not yet been excavated), and a large Roman bath building. From the findings it becomes clear that the city was small and it had little cultivable land and was barely approachable, except by sea. However, this site has produced more sculpture than any in Crete except Gortyn. Many of the heads of statues and statuettes were found in a heap some distance away from the torsos; most of them represent Asclepius or Hygieia, or girls and boys (presumably consecrated to the god). They are of Hellenistic and Roman date, but the types are mostly Classical. A number of statue bases bear dedications to Asclepius and Hygieia. The finds are in the Chania and Herakleion museums. This fact testifies the prosperity and the power of Asclepius of Lissos. 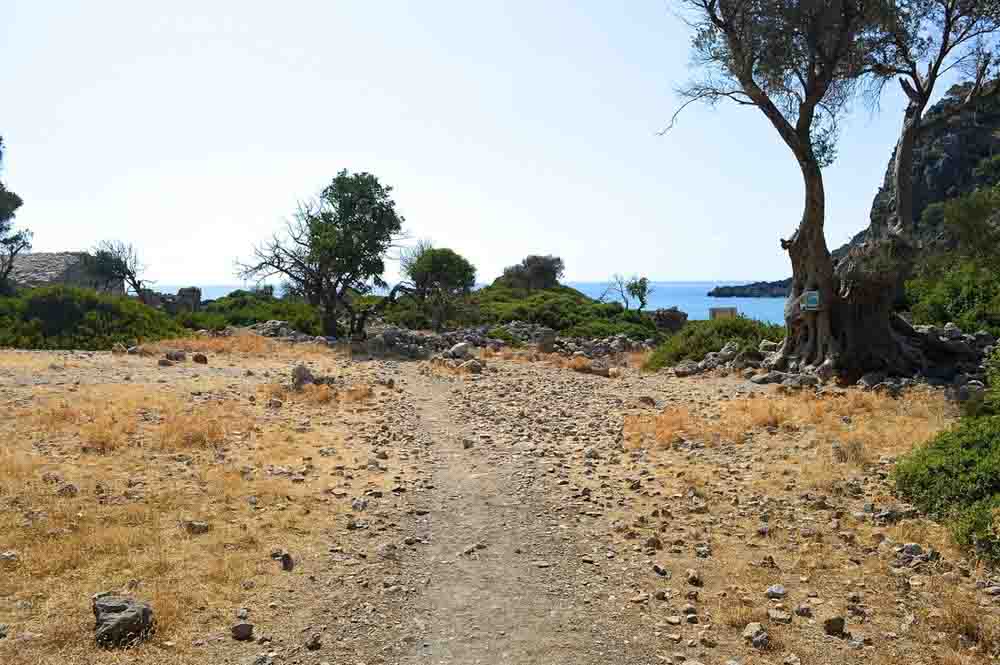 A path leading to the chapel of Panagia and the beach 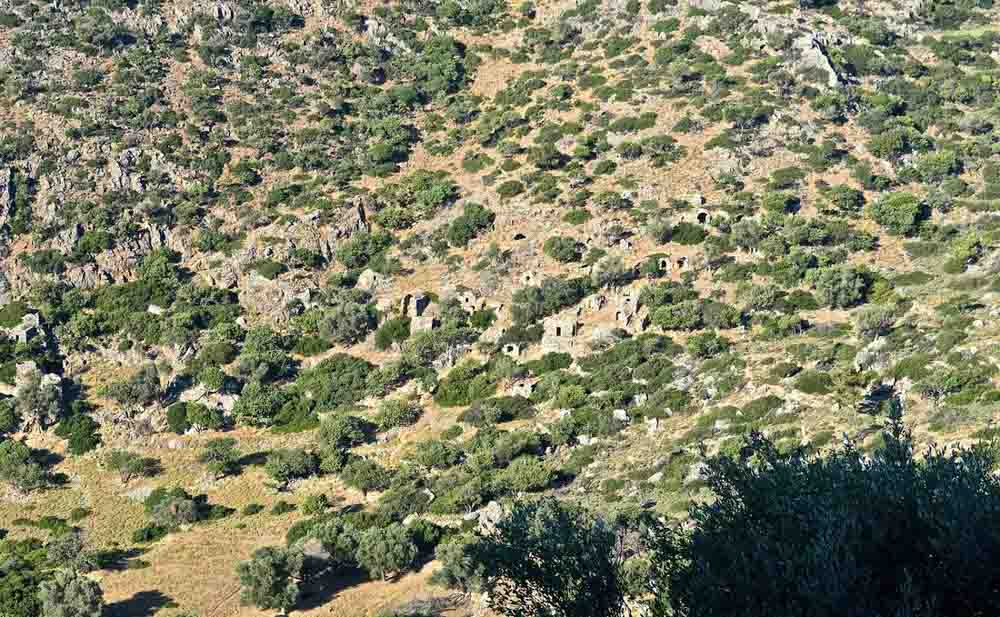 Lissos also has its own coins with the images of Artemis and dolphin and the word LISION (of the Lisians). Lissos and Yrtakina were allies and they had trading intercourse with common currency. Their coins had dolphin or flying dove on the one side, and eight-ray star with the word L/I/S/I/O/N (of the Lisians) on the other.

Lissos always maintained good relations with the other cities that existed in this part of western Crete. During the Roman and first Byzantine periods Lissos was still a thriving city. It is worth noting that in the Byzantine era the city was a bishop’s seat till 9th c. A.D. which was a privilege of the most important cities of the time. It seems however that in 9th c. A.D. activity in Lissos ceased, the city was deserted after the liberation of Crete from the Arab dominion and it was never inhabited again. However, the religious character of the place has been preserved until the Byzantine period.

What has survived till the day? 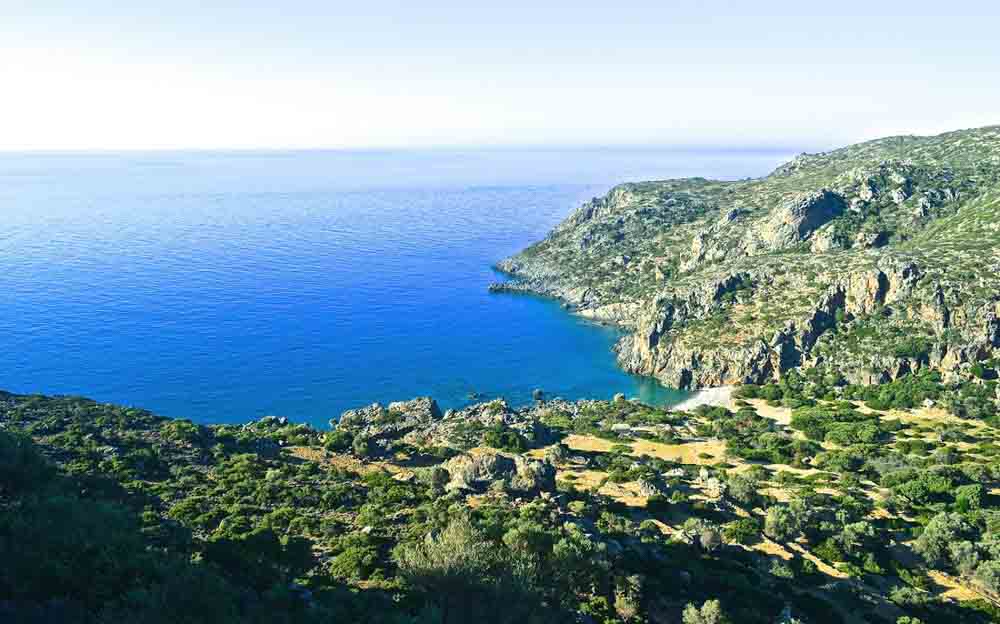 Arriving on foot the valley of ancient Lissos opens up in all its glory: in front of you, on the other side of the valley one see Roman necropolis. This cemetery occupies the entire southwestern and western slope of 118 visible graves. For the most part is created, vaulted, single spaced with a rectangular plan. In three cases we-storey tombs, while at least four small hall there on the scale.

On the left hand site is located ancient residential area, while the public operations of the town (mainly the Agora) should be sought in the middle. However, all of it now left are ruins. No trace of fortification is preserved as the town, reputed religious centre, was in no such need. Ruins of towers are present though, probably serving as watch towers on the surrounding summits. No certain traces of roads or ancient paths have been discovered.

Except for the sanctuary of Asclepius, it won’t be easy to identify the other ruins of the ancient city, because not only have the excavations not been completed, but the place has been left to its fate as well. There was one temporary guard some time ago that is not anymore and now thick bushes cover everything. If you walk through the rocks and bushes, you will find indications of ancient Lissos in each step you take.

The most impressive remains have survived from the sanctuary of Asclepius - the healing god of antiquity and god of medicine, with more than 900 temples and sanctuaries located across the Graeco-Roman world. The cult of Asclepius flourished from the 4th century to the imperial Roman period. The Asclepius of Lissos was possibly the main reason for the wealth of the city. In ancient Greece, the temples of Asclepius were what hospitals are in our present-day society. Thus in Lissos many people from all over the surrounding region came to be healed.

In ancient times, the waters of Lissos were considered medicinal and in the Asclepius many illnesses were cured by methods of what we call today holistic medicine. The purity was especially important element in the cult of Asclepius therefore there were often found water sources near the entrance of the temple. 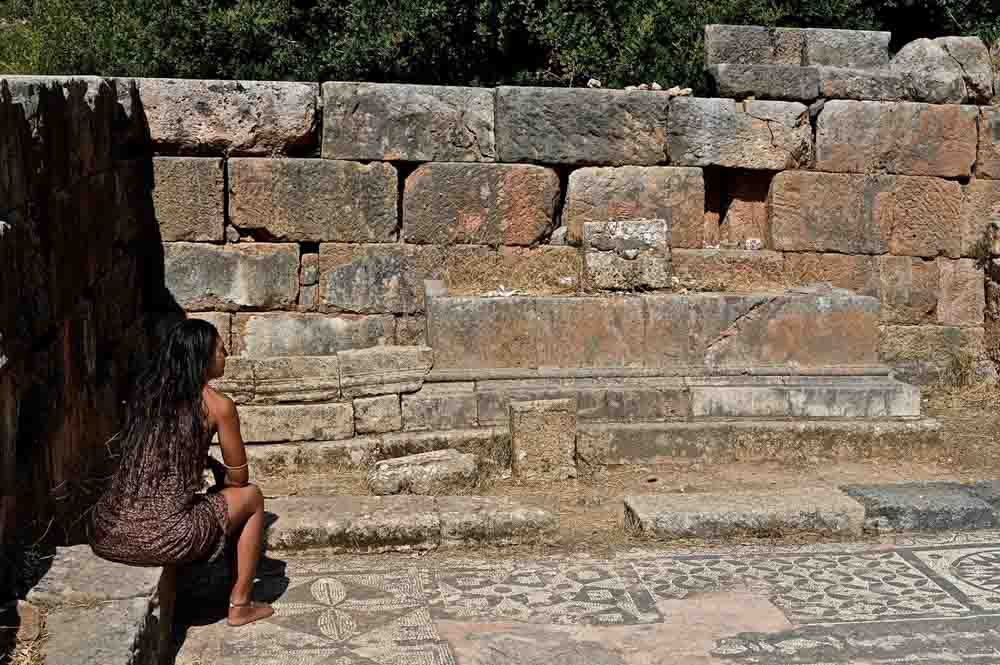 The worshiper in the sanctuary of Asclepius in Lissos

The Asclepius temple in Lissos was well adapted to the rocky landscape: it was entered from east and had a colonnade on the south side. Hellenistic honorary (‘proxeny’) decrees are built in its entrance, while another inscription dedicated to Emperor Tiberius has been discovered among the fallen inscribed stone fragments. Together with mosaic floor added during the Roman times (69 BC - 330 AD), that is partially preserved till the day, they witness a long-lasting flourishment of the sanctuary. During the early Christian period an attempt to purify the temple has been made (signs of the cross were engraved on the masonry). A monumental staircase leads to the temple, on the right side of which lies the fountain were the healing water of the ancient source gushed out. 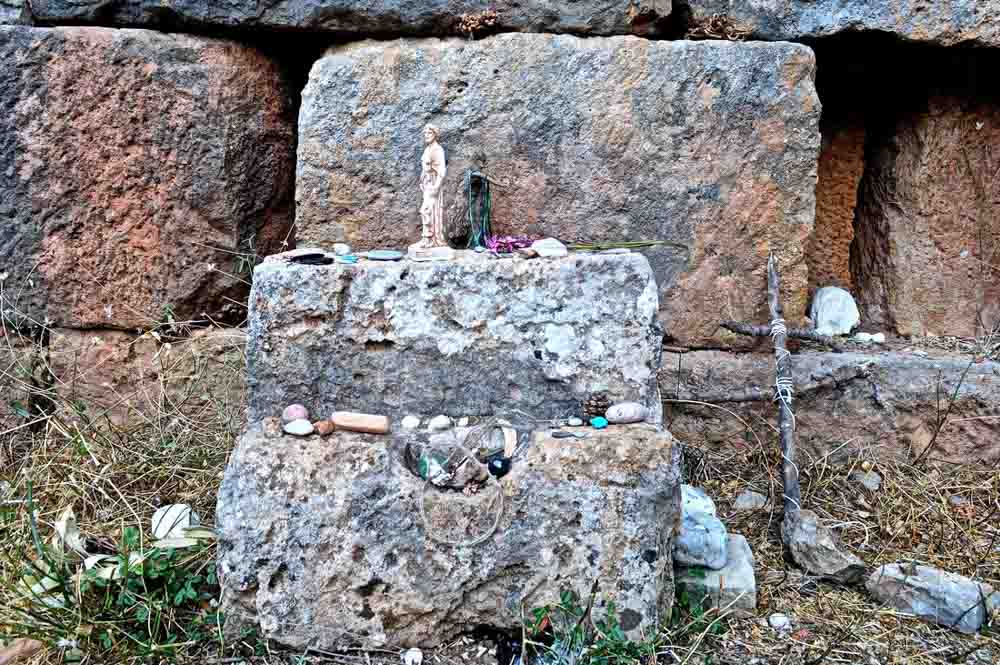 Shrine at the sanctuary of Asclepius 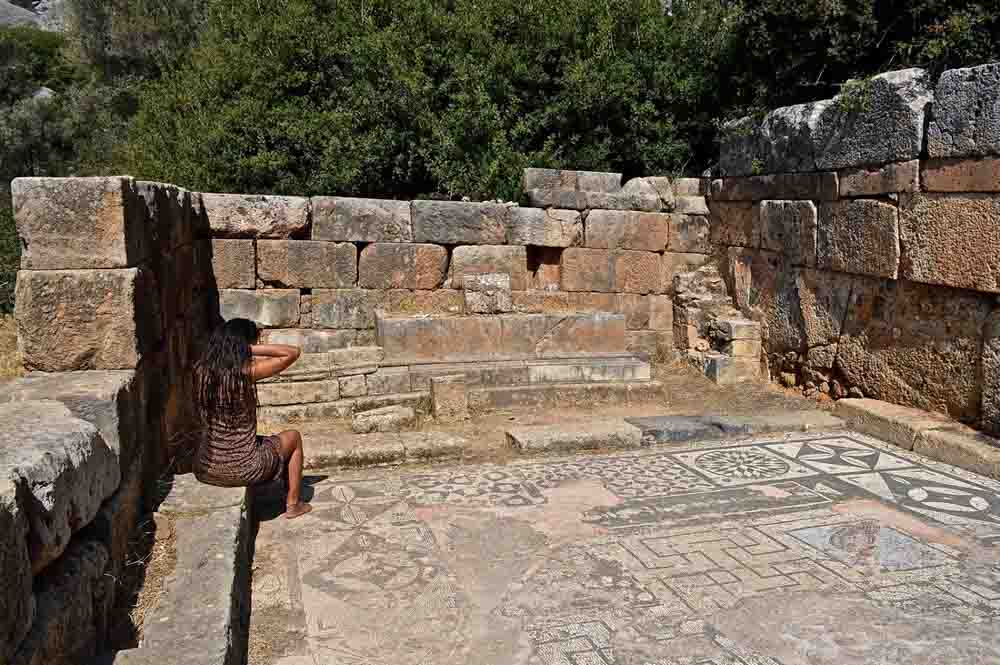 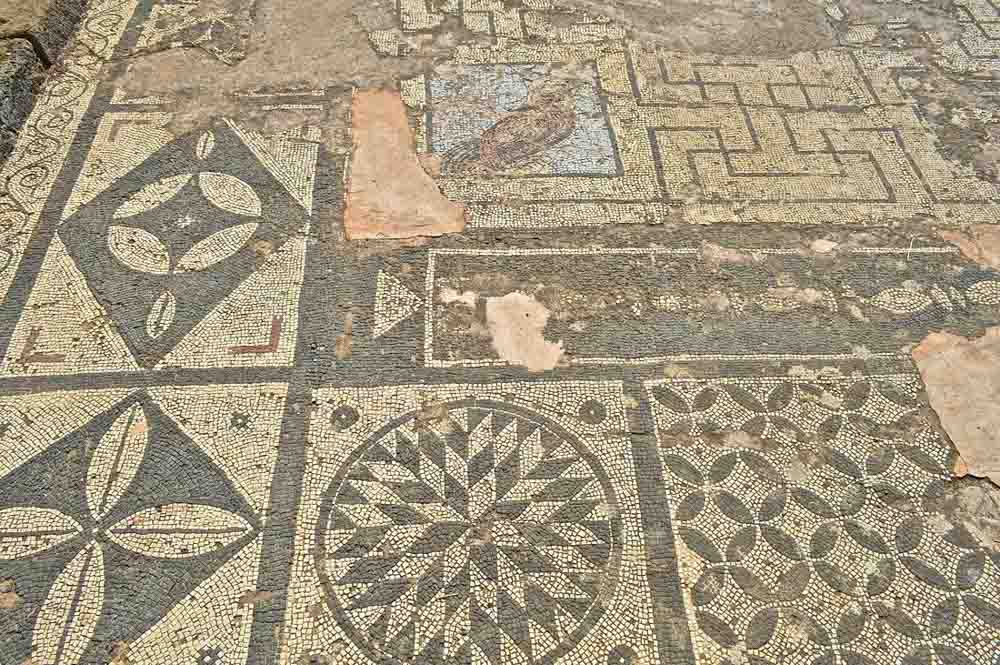 Beautiful mosaic from Roman times at the sanctuary

The temple of Asclepius was excavated by Nikolaos Platon during the years 1957 - 1961. It turns out that the sanctuary was destroyed by earthquake as enormous rocks that tumbled down from higher and crushed the place. They turned the small Doric building into ruins, thus sealing its content: a wonderful collection of Hellenic sculptures, offerings of the worshipers whose names were engraved on theis bases, as well as the statue of god Asclepius himself (all of it moved away from the place, to the museums).

Clearly, the thermal water of the area was the reason to acquire Asclepius great reputation. Nearby was a building used by priests or visitors. The spring itself was approached by steps from the terrace; beside it was a large cistern. It became an important center of hydrotherapy with visitors from all over Crete and the northern coast of Africa. 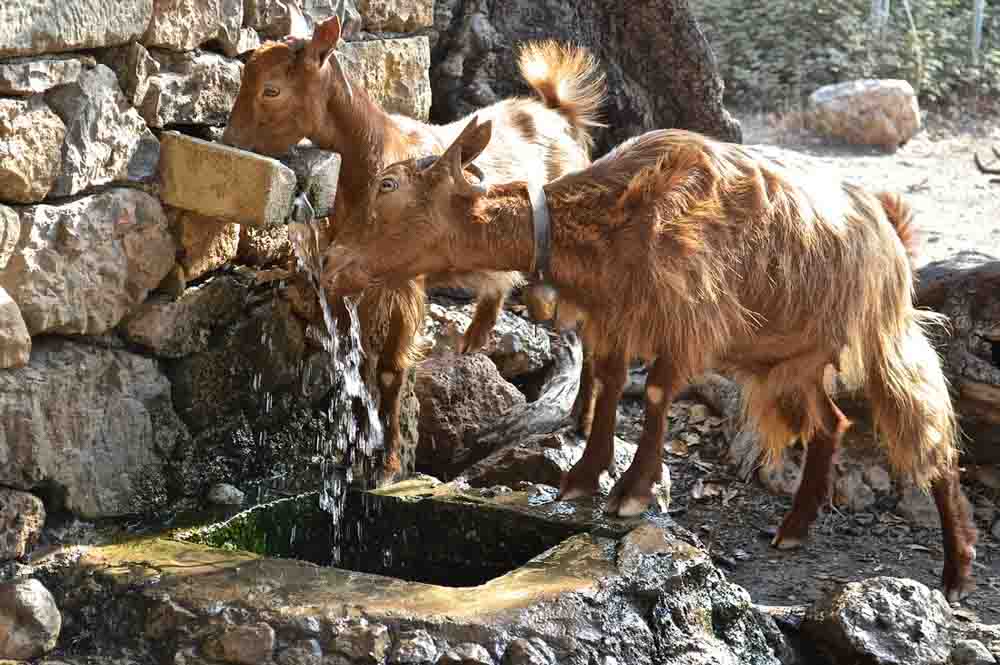 Goats enjoying the spring water in what has become now the resting area of ancient Lissos, under the shade of carob trees 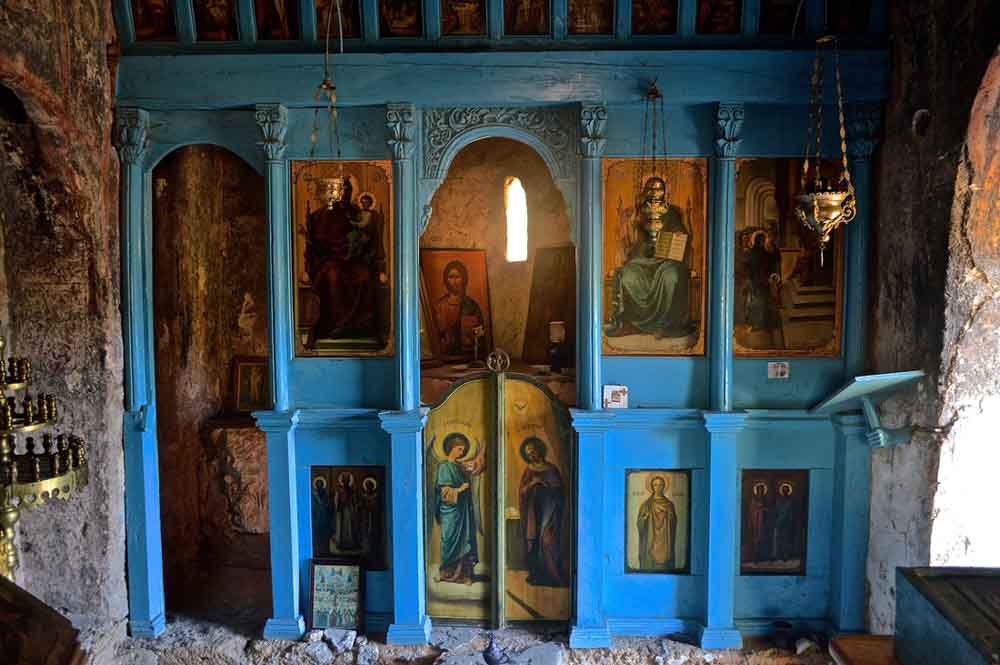 A chapel of Agios Kirikos was built where the Holy Bema (= a platform before the entrance to the adyton of an Orthodox church) of one of the basilicas existed. It appears to have measured 22.8 x 11 metres, and it celebrated on July 15th. 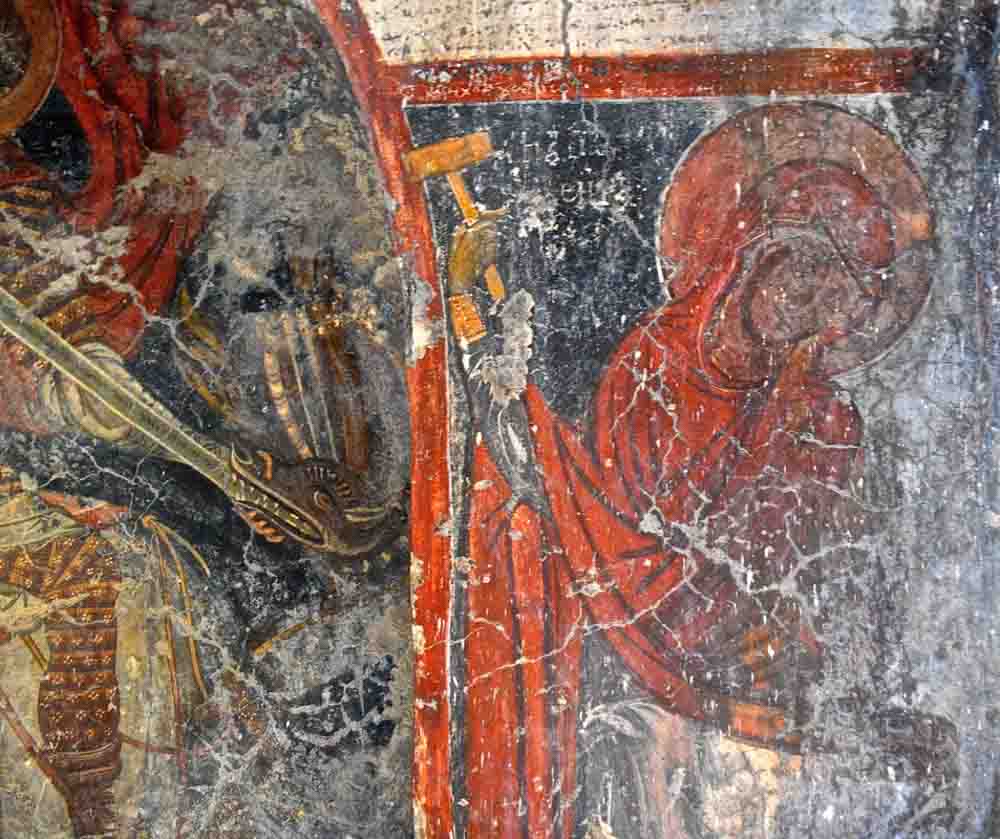 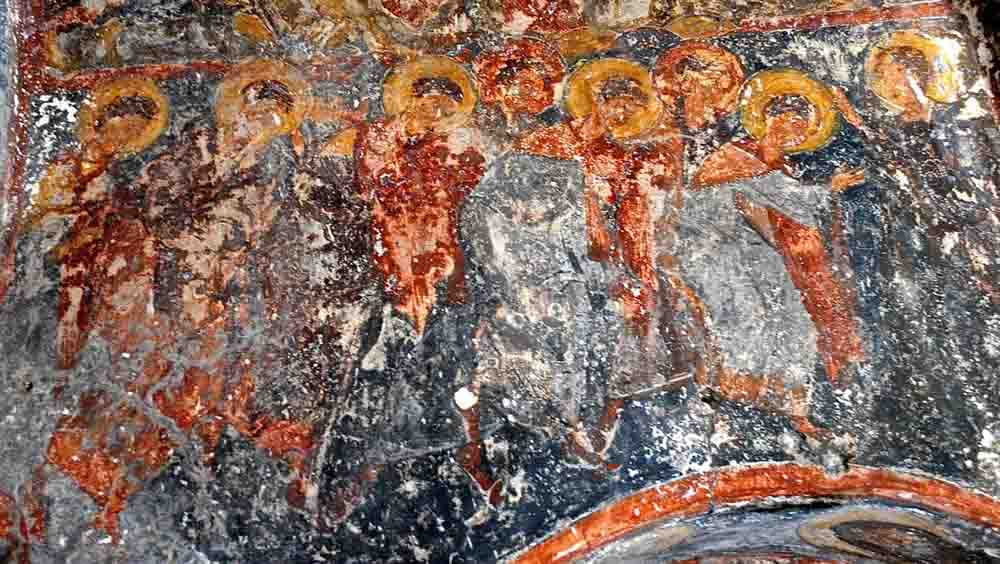 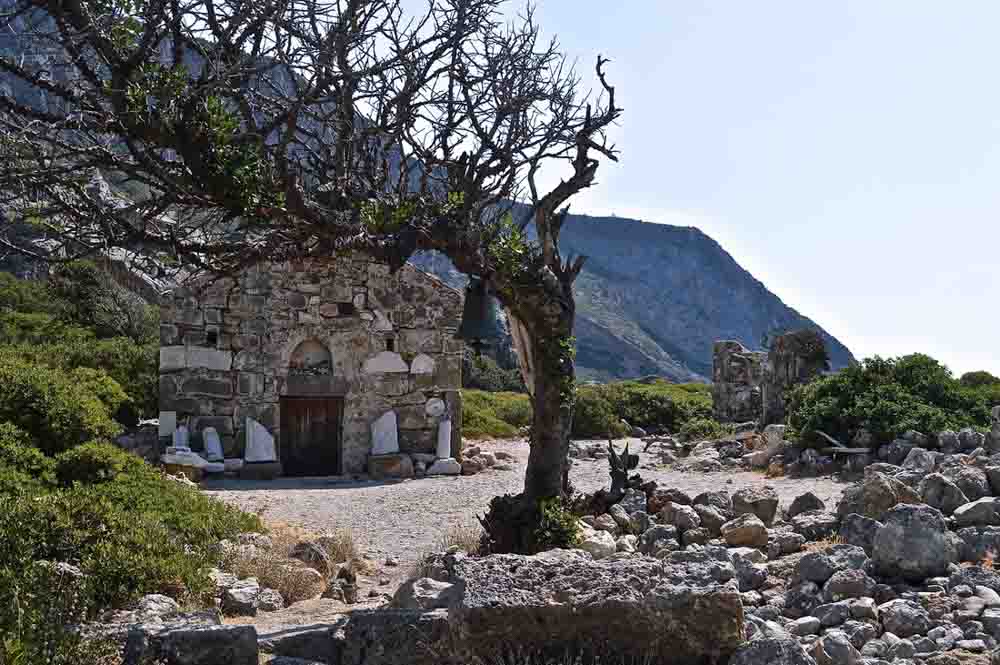 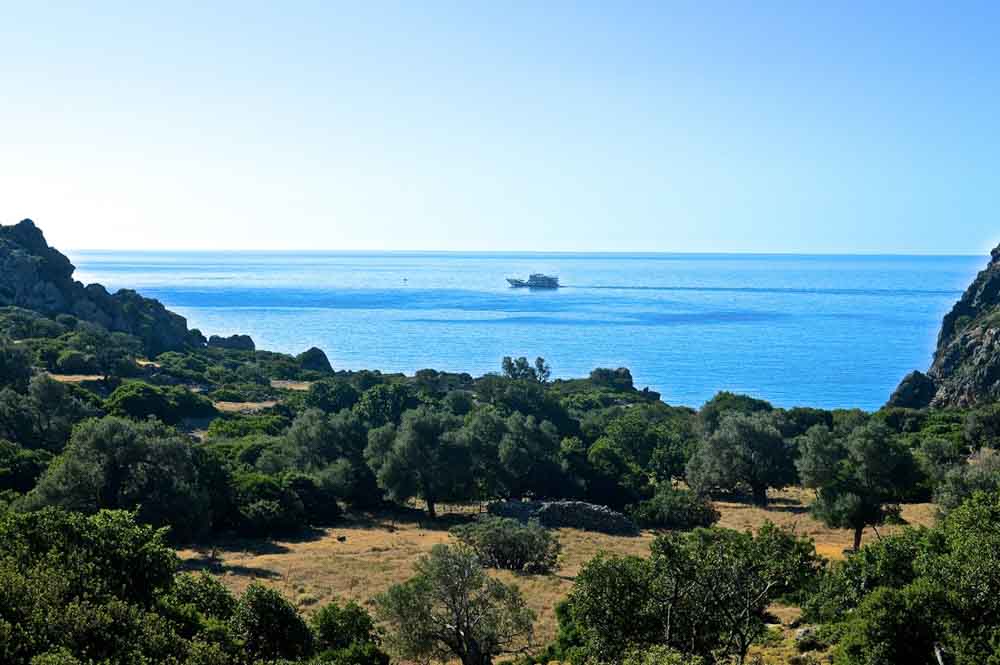 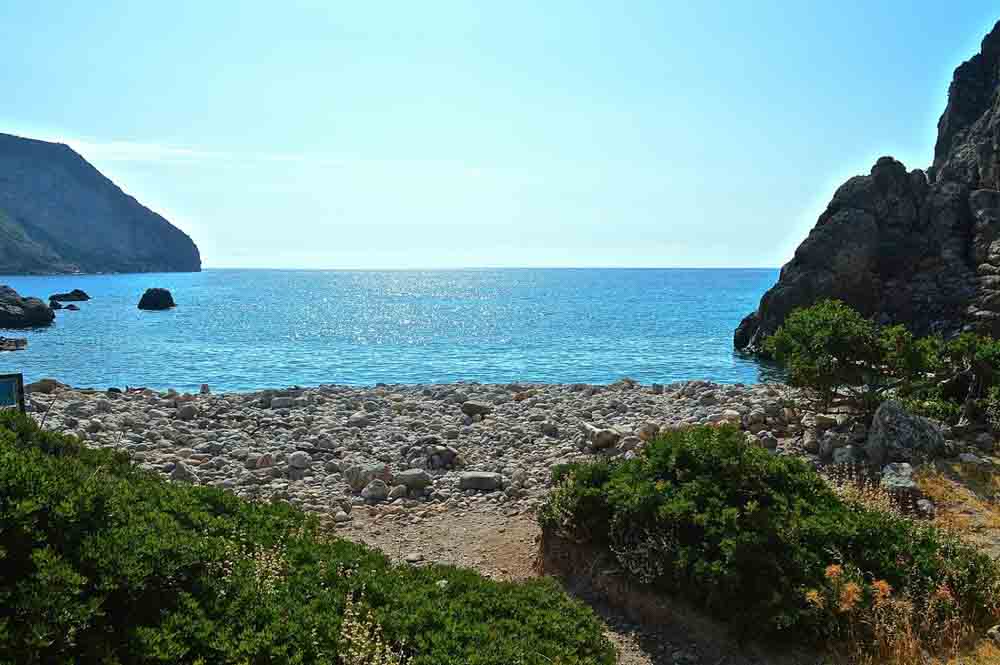 The small beach of Lissos, set in a small cove has coarse pebbles

To and from ancient Lissos

On foot: the trail starts at the small beach next to the harbor of Sougia and continues well into the pine-clad, scenic gorge. At some point, it exits the gorge, climbing uphill, and continues over the plateau. Approaching over Lissos, you see a panoramic view across the Lissos area. It takes about 1.5 hours one way. 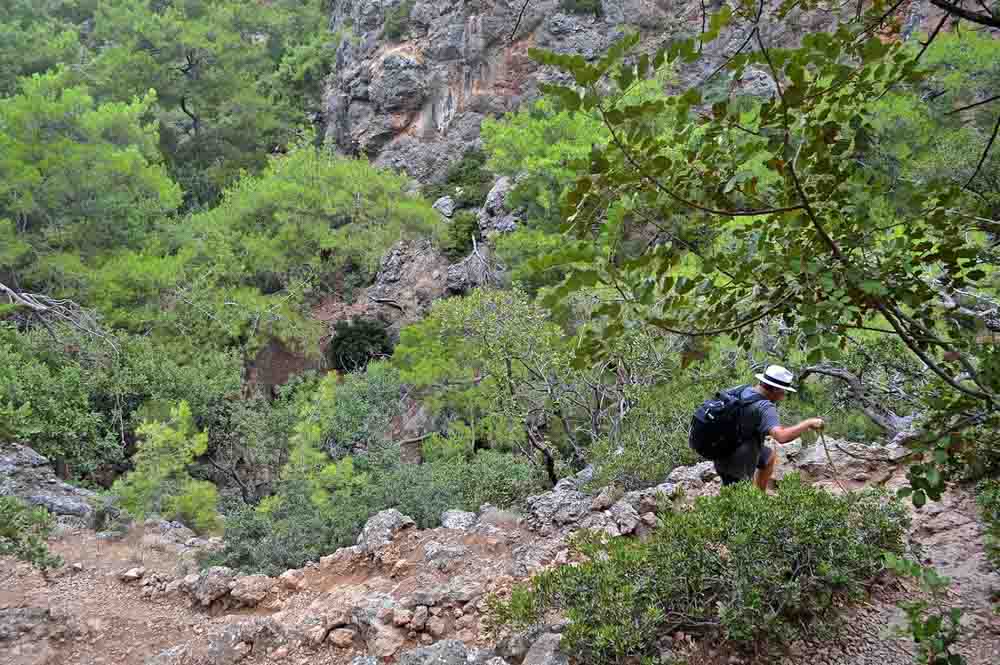 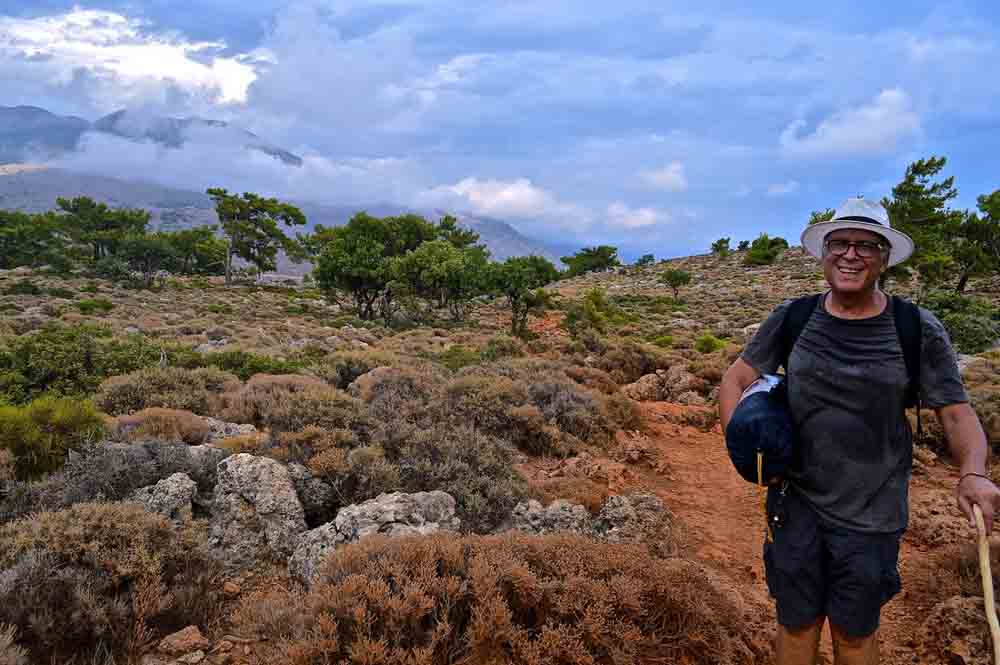 By boat: you can reach (or leave) Lissos by boat that takes about 20 min from Sougia. If you have arrived to Lissos on foot and have no desire to walk back, you can call to order a boat - there is a phone number of a boatman written on the table at the beach. 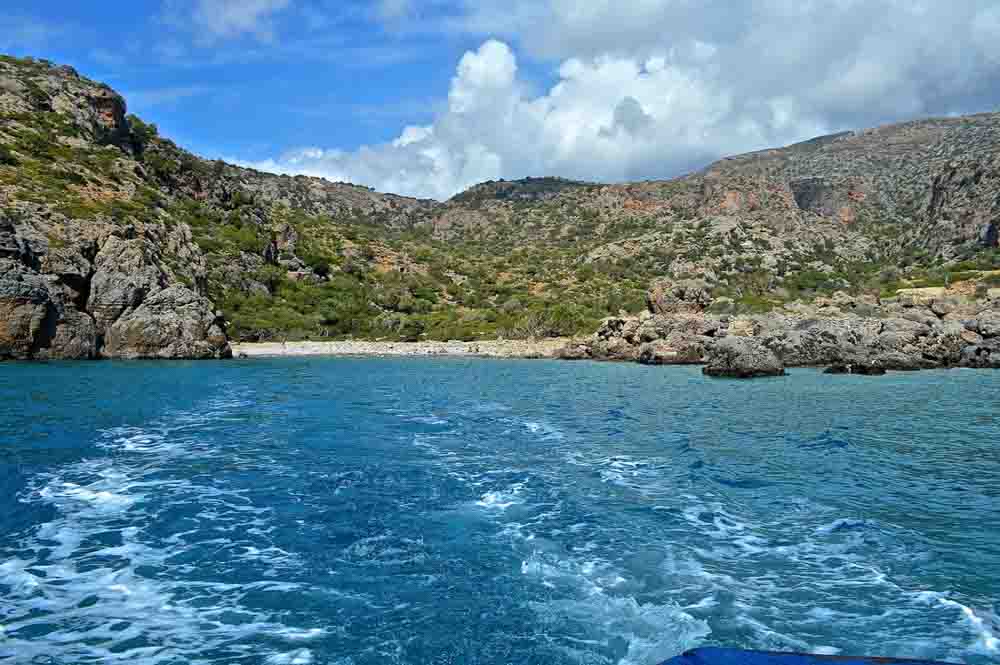 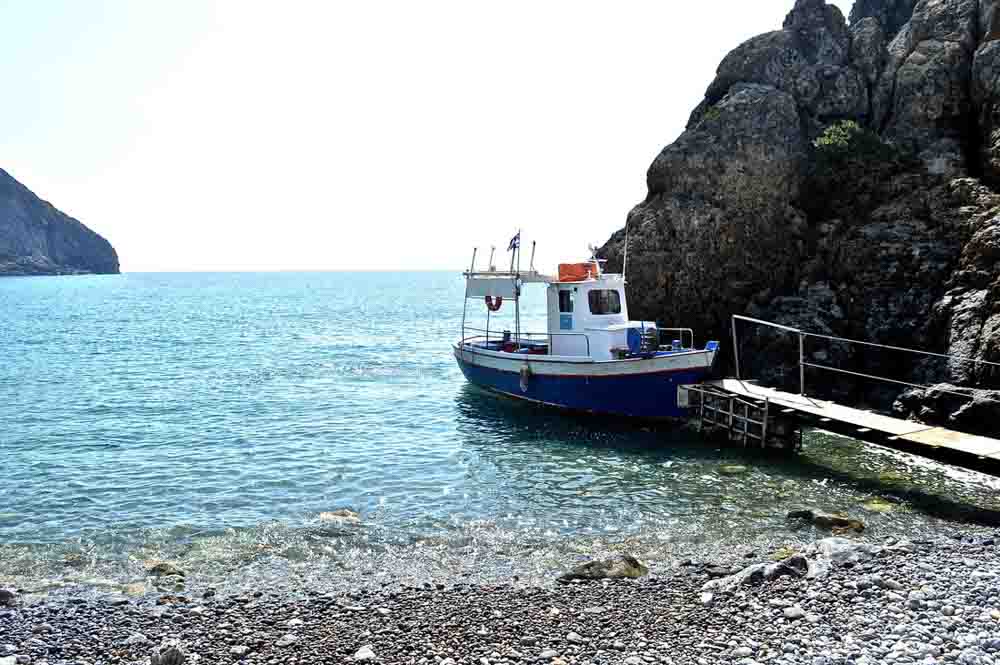 The boat that takes back to Sougia
The description includes text from the Princeton encyclopedia of classical sites, Princeton University 1976, website https://www.alpha-omegaonline.com/ and other information and materials available online.
Joseph