Secrets of Crete Tours the history of Spinalonga island

The history of Spinalonga island

Crete has always been the meeting point and melting place between East and West. Because of its strategic location in the region the island has naturally become of great interest to neighbours, invaders, wonderers, pirates and traders. Here is the quick sum-up of the history:

It should be mentioned that Spinalonga was not always an island, but was once linked with the adjacent peninsula of Kolokitha  (peninsula of 'pumpkin').

Venetians and construction of fortress

Rich and flourishing Venetian Republic bought Crete for 5000 golden ducats from Crusaders. The Venetian merchants immediately recognised the value of the natural harbour of Elounda and naturally exploited it. In the shallow, salty waters of the bay they built salt-works, a particularly while continuing to export local agricultural goods. It should be noted that the Venetian rule over Crete proved troubled from the beginning, as it encountered the hostility of the local populace. In the words of the medievalist Kennerh Setton, it required "an unceasing vigilance and a large investment in men and money to hold on to the island". Although the local Greeks, both the noble families and the wider populace, were allowed to keep their own law and property, they resented Latin rule and the strict discrimination between them and the Latin Venetial elite, which monopolized the higher administrative and military posts of the island and took most of the benefits of the commerce (trade) passing through it. During the early period of Venetian rule, the Venetian colonists consciously maintained themselves apart; until the end of the 13th century, even mixed marriages between native Cretans and Venetians were prohibited.

After the Ottoman conquest of Constantinopoulis in 15th century (1454) and Cyprus in 16th century (1571), Crete remained Venice's last major overseas possession. By mid-16th century Crete had remained the only and single bastion towards the West and therefore very much desired territory. The Republic's relative military weakness, coupled with the island's wealth and its strategic location controlling the waterways of the Eastern Mediterranean attracted the attention of the Ottoman Empire.

In order to protect Crete from the pirate rides (the famous Turkish pirate Barbaross that is also featured in the film Pirates of Carribean) the Venetians built a big fortress on the island on the ruins of an ancient acropolis in 16th century (1579) under the supervision of the General Proveditor of Crete Giacomo Foscarini. 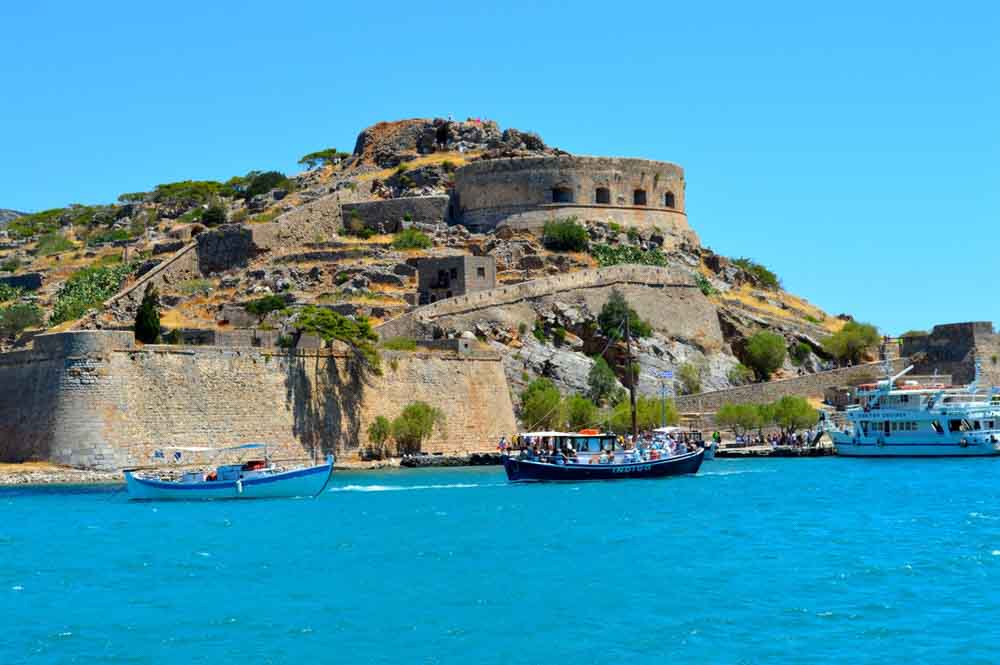 To get an idea of what Spinalonga was like at the time - the fortress is a fortified complex including high double walls and stern towers. In 1630 it had 35 (gunpowder) cannon. That means that it had been turned into an island fortress with great firepower. This explains why it was never conquered by an enemy. The island had well organised military camp – with residences for the provedditor and the garnison commander, barracks, gunpowder magazines, storehouses for food and weapon, churches (7 churches were originally built, today 2 churches have remained) and water collecting system (cisterns). Most of the Venetian camp buildings were altered or destroyed later. Today most of it is preserved in reasonable condition and it is considered one of the most important sea fortresses in the Mediterranean.

It should be man tined that there are 222 Venetian fortresses around Mediterranean and 29 fortresses built around the Crete.

In the long and devastating Cretan War (1645 - 1669) the Ottomans quickly overran most of the island, but failed to take Heraklion (Candia), which held out, aided by Venetian naval superiority, until 1669. Only the three island fortresses of Souda, Gramvousa and Spinalonga remained in Venetian hands.

The Turks invaded Crete in 1645 and conquered most of the island in two to three years. Heraklion (Chandia) held out for 21 years before falling in 1669. Spinalonga, however, was only surrendered 60 years after the Turkish invasion, showing how well the Venetians had designed its defences. Nevertheless, in late June 1715 Turks laid siege on Spinalonga. Following three-month blockade during which all the food-supplies were exhausted, Venetian commander Zuan Francesco Guistiniani handed over fortress to Kapudan Pasha (Otooman Lord Admiral). Under the terms of the treaty, all Frankish or Greek inhabitants of the island were free to leave the island together with their belongings or to remain there as subjects of the Sultan. Guarantees were given for the safe withdrawal of Venetian guard and all the rights to Christians remaining in the fortress to maintain an Ortodox church ‘so as to worship their faith’. However, the treaty of surrender was only observed as far as Venetian withdrawal was concerned but the islands inhabitants who were refugees from the Ottoman controlled-Crete were imprisoned and sold on the flourishing slave market of the time. Approximately 230 men and 240 women and children living at the time on the island were sold as slaves.

During the Turkish occupation, a new era in the history of the island began. The island become one of the main seats of Ottoman families as due to its isolation it was regarded as safe from Cretan attacks. Due to Cretan revolt and hostility, in the second part of 19th century the island became even more densely populated and in 1879 became an independent Municipality. It seems  that in 1881 it reached the peak  - there were 1112 people living on Spinaloga.

Most of the buildings standing inside the fortress were houses in the Ottoman settlement. These were two-storey structures with wooden doors and window frames painted in bright colours. Each house had its own courtyard, surrounded by a high wall which usually houses small ancillary buildings such as cooking area and latrine. Floors were tailed and the courtyards were often pebbled. The most well-to-do houses had also a rainwater cistern.

When Crete was placed under Great Powers of the time (England, France, Italy and Russia), French forces were stationed on the island. Following Cretan autonomy most of Spinalonga’s inhabitants migrated to the shores of Asia Minor. 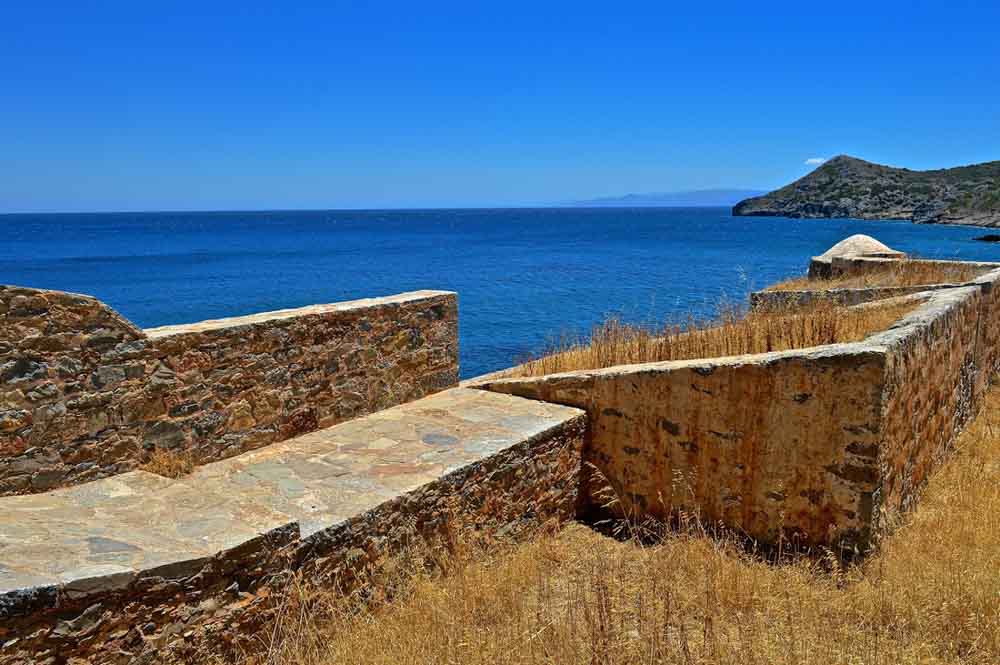 In spite of its long and turbulent history, today Spinalonga is mainly known as the Leper Island. In 1903, a leper colony was established on Spinalonga, to isolate people suffering from disease. Even though today leprosy is curable and sufferers can lead a normal life without transmitting the disease, the world “leper” still carries a social stigma. However at he beginning of 20th century the cure for leprosy had not yet been discovered, and the contagious disease was regarded with horror. People were terrified of leprosy and lepers had to wear bells to warn people of their approach. It was not known that most of the population is naturally resistant to the disease and that the risk of contagion was much lower than thought. But who would run the risk of catching an incurable, fatal disease? So a small island was the ideal solution for isolating sufferers from the healthy population, who could thus feel safe. Spinalonga was ideal because it was close to shore, permitting the easy transfer of patients, food and supplies. There were also many empty houses there after the departure of the Muslim inhabitants. On 30 May 1903 the decision to transform Spinalonga into a leper island was signed, and 250 patients were moved there from various parts of Crete. More came following the unification of Crete with Greece in 1913. 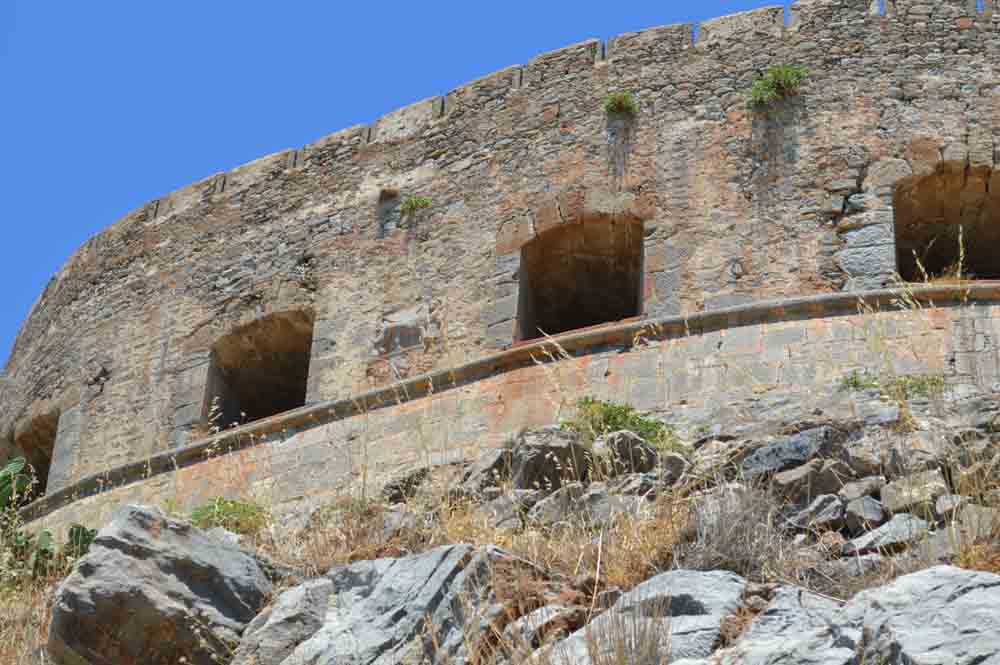 How the daily life of lepers was?

Lepers - the patients of Spinalonga were entitled to a small monthly allowance, which was often not enough to cover their food and medicine. These were hard times, when Greece was rocked by successive wars (Macedonian Struggle, two Balkan Wars, two World Wars, the Civil War), worsening the position of the lepers on Spinalonga. Living conditions were extremely poor at that time. The great change came about in 1930 when lepers from Athens were brought here. Many of them came from wealthy families and therefore had money to sustain and improve the life in Spinalonga. This is when the houses of Spinalonga were renovated after many years of decay. The road around the island was opened. In thirties Spinalonga opened its own cinema where they showed films weekly. The film title was published in weekly Spinalonga magazine and it was very popular. The cinema, the films brought very much joy to the people of Spinalonga. An outdoor cleaning service was set up, a theatre and cinema were built, and classical music was heard from the loudspeakers in the street. People fell in love and were married on Spinalonga - about 170 marriages took place.  They had children, some of whom grew up with them without ever catching the disease - 154 children were born. Lepers looked after one another, did any work they could to improve their lives, ran their own kafeneion and barber shop, and had their own church of St. Panteleimon, with a brave priest who, though not a leper himself, volunteered to spend his life among the exiles.

From 1948 onwards, when the cure for this dreadful disease was discovered, the number of lepers on Spinalonga fell.

The Leper Hospital remained operational until 1957, when the last 20 patients were moved to a leper hospital in Athens. Many others had recovered and gone home in the meantime.

Afterwards Spinalonga was abandoned and looted, and many pieces of architecture from its houses now adorn the luxury hotels of Elounda. In the 1970s Spinalonga was declared a protected archaeological area