The Sacred Mount Juktas Discover 6 of its Secrets

The Sacred Mount Juktas Discover 6 of its Secrets

Breathtaking view of the blue infinity of Aegean sea, over the olive trees-dotted hills, extensive vineyards, Cretan wild herbs and fresh air ... God Zeus knew what he is doing by choosing Mount Juktas as his final resting place. So did Minoans when erecting right here their fist ever peak sanctuary on Crete. The peak of Mount Juktas, referred to also as Sleeping Zeus mountain, is the most remarkable natural feature of central Crete. Throughout the millennia this sacred mountain has been a place of worship - first venerated by Minoans and than churchgoers. Erect high above the terrain of the island, it reveals an awe-inspiring panoramic view over Crete's North coast - there is no better place to enjoy that kind of grand sight anywhere within vicinity. Come along! 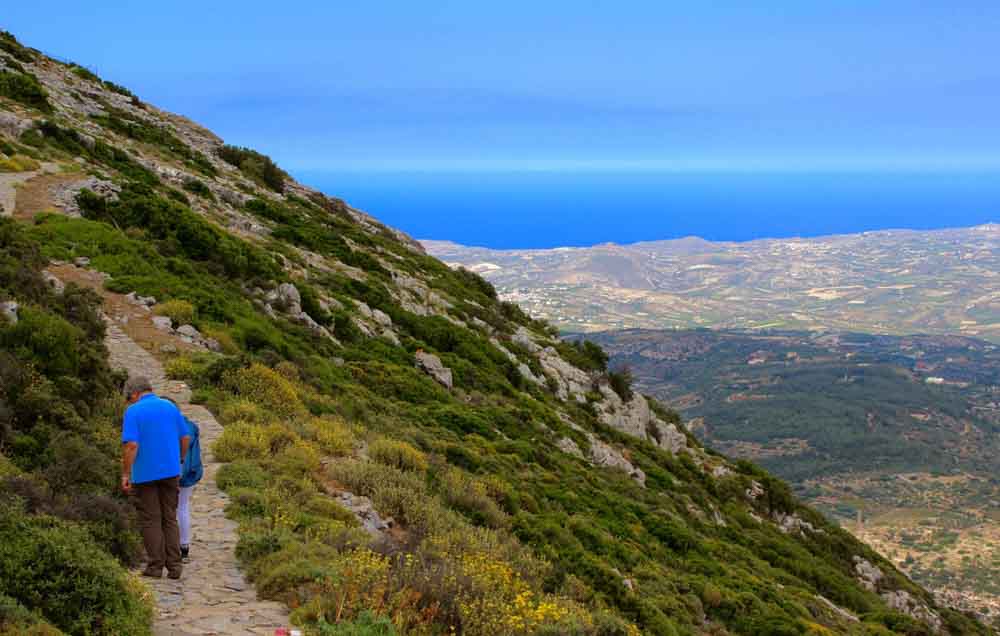 While enjoying the grand view, you feel the fresh air is scented with healing wild herbs - aroma of sideritis, oregano, thyme and sage. This is the right place to pick up your own mountain tea for a wonderful herbal fusion. The mount has an altitude of 811 m and its home to 360 species of plants (approximately ⅕ of Crete’s flora), some of which are endemic to Crete. One such example is Dittany (Dictamnus Oreganus) an endemic herb which grows in affluence on the sudden cliffs of the mountain. Along the Mt. Juktas trail, there are a large number of signs informing visitors on the names of aromatic and other plants in Latin, posted by the Archanes Centre for Environmental Education. 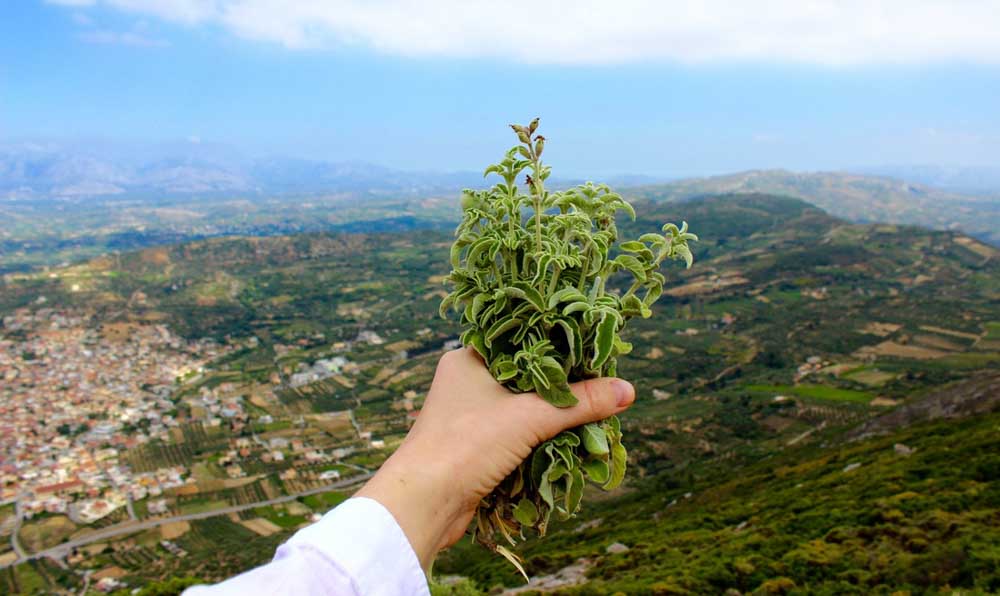 Jouchtas mount is the right place to collect your own wild herbs - a Cretan mountain tea!

Crete is Zeus birthplace but it is also his resting place. Ancient authors believed the sacred, anthropomorphic Mount Juktas to be the tomb of Zeus. It has four sacred caves, one at each point of the horizon. In the Minoan period these were places of sacrifice, ceremonies and food storage.​The Cretan Zeus was a deity who each year died a violent death and came to life again. He thus resembled closely the Egyptian Osiris who became Judge of the Dead. The shape of Mount Yuchtas when viewed from the west, reveals the profile of a bearded head reclining as in sleep or in death and represent the face of Zeus; right here, according to the myth, in the mountain lies his tomb. Following his death, God Zeus, legend states, was reborn annually in a springtime. 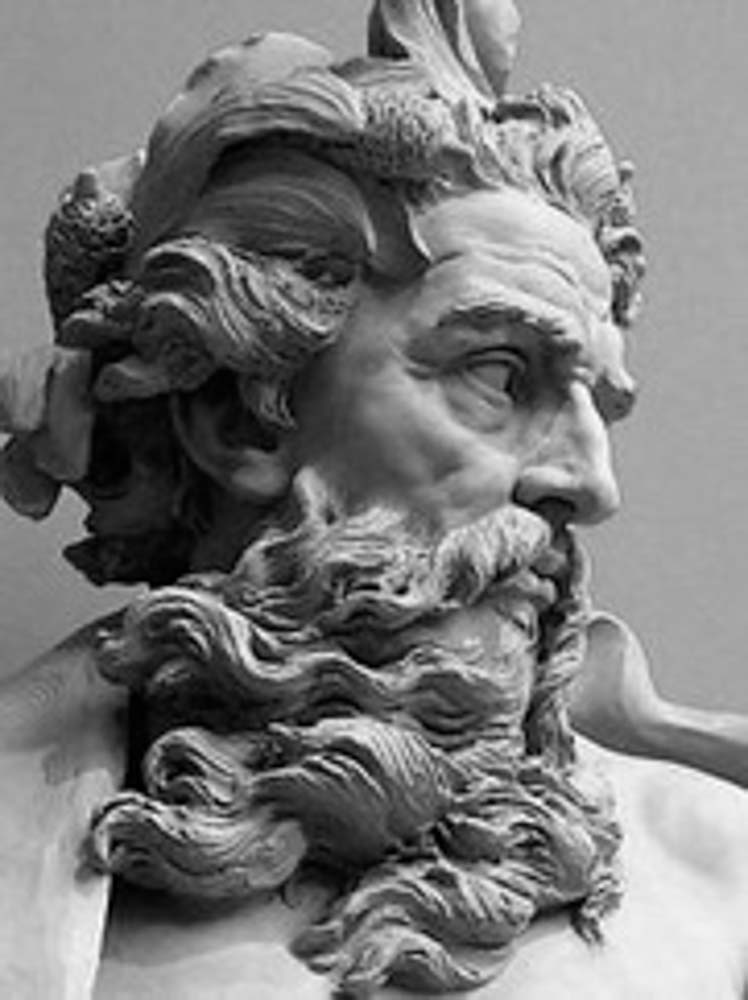 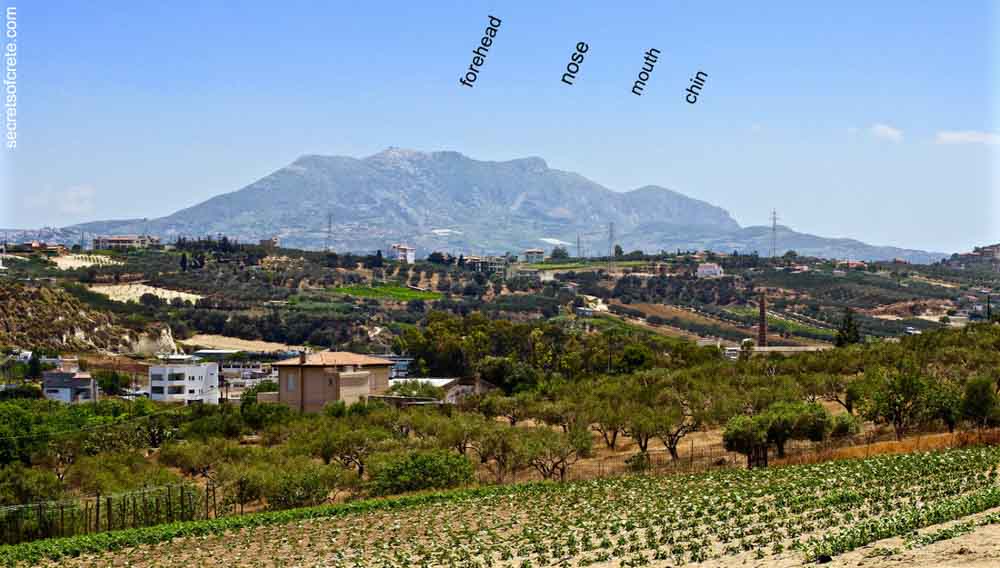 Since antiquity God Zeus as had many names, many faces and manifestations - "Zeus, god of vintage", "Zeus, god of sailors," "Bald Zeus", "Dark Zeus" (god of death and the underworld), "Zeus-Trophonios" (earth-god), "Zeus of thunder and rain", "Zeus, lord of flies", "Zeus, god of boundaries", "Zeus Soter", as well as the "Cretan Zeus".

A Greek Orthodox chapel is located about a kilometer south of the sanctuary along the ridge of the mountain. Every year, people from towns down in the plains below Mount Juktas bring flowers in procession to the chapel. 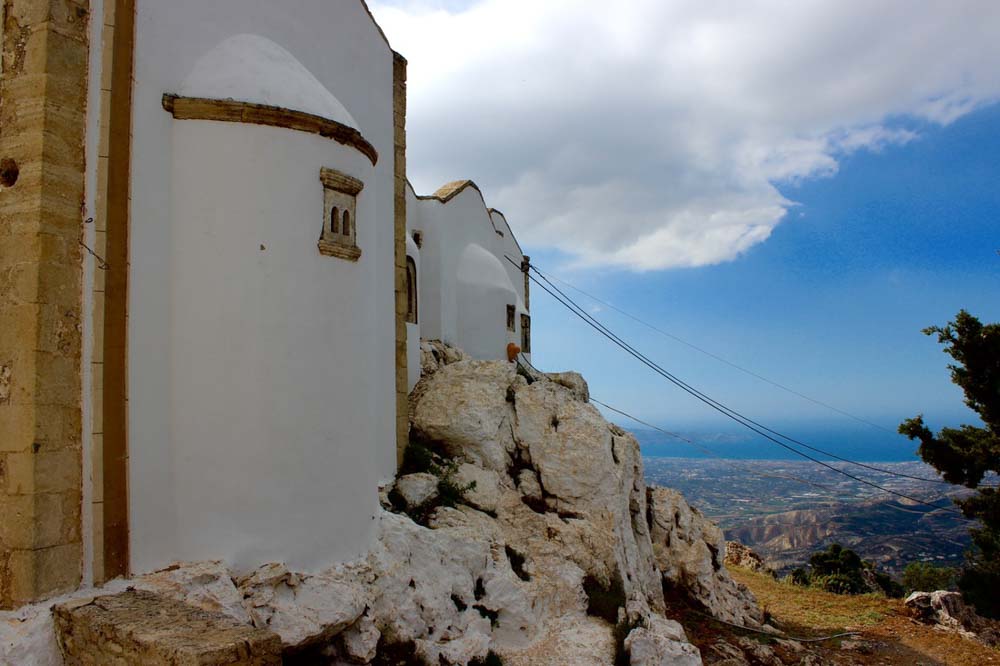 In the past Mount Juktas has also served as astronomical observation centre from which solstices, equinoxes, moon, sun and star movements could be observed.

Juktas Mount occupies a central place in the Cretan sacred landscape of Minoan times - it was the first Minoan sanctuaries on Crete and the most ancient peak sanctuary on Crete  - appeared about 2100 or 2200 bc. Mont Juktas sanctuary is clearly linked to the palace at Knossos.

The Minoans clearly believed, in common with many other peoples in Africa, Asia and Europe, that deities lived on the mountain tops, or at least made appearances there. Religion played a major role during Minoan times, both in the towns and in the countryside. The Minoans worshiped in caves and on mountain peaks, where they dedicated clay figurines in ‘ash altars’. 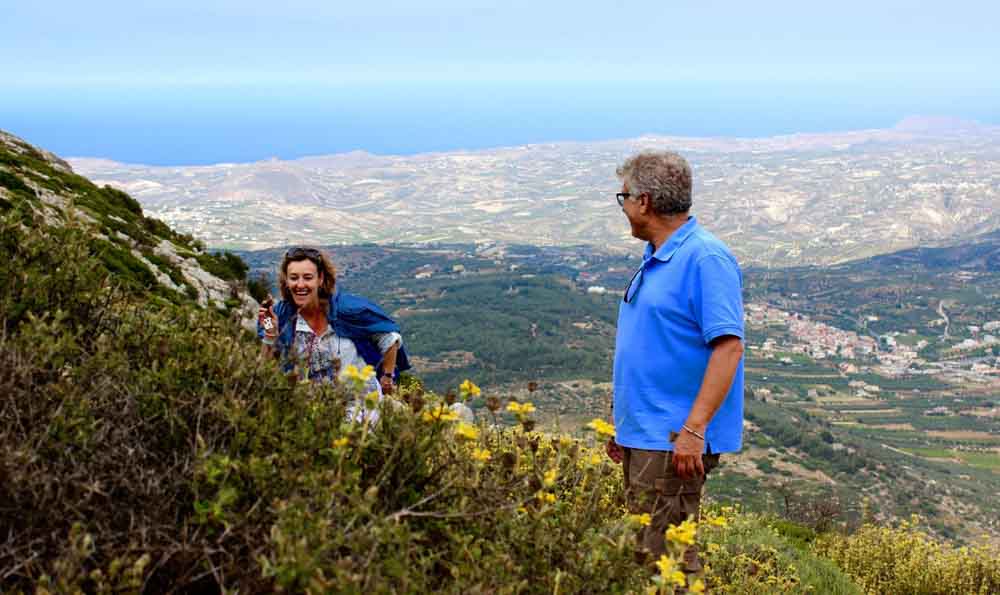 On a way to Minoan peak sanctuary

Mount Juktas is also a place of mysterious ritual of Minoan period - a human sacrifice. The sacrifice ritual took place further down the slopes of Juktas at the small but significant site - Anemospilia (excavated in 1979).  The sacrifice place of Anemospilia was built in the Middle Minoan IIB period (c. 1800-1700 BCE) and destroyed in the Middle Minoan III period (c. 1700-1600 BCE) by an earthquake (c. 1650 BCE), causing the entire building to crumble to the ground. Four human skeletons were discovered in the sanctuary, one of whom is believed to have been a human sacrifice.

There are many questions to the day but clearly - in the very moment the building collapsed, there was a group of people inside performing a ritual. Who knows, perhaps they were enacting a drastic ritual to prevent the very earthquake that interrupted and killed them. 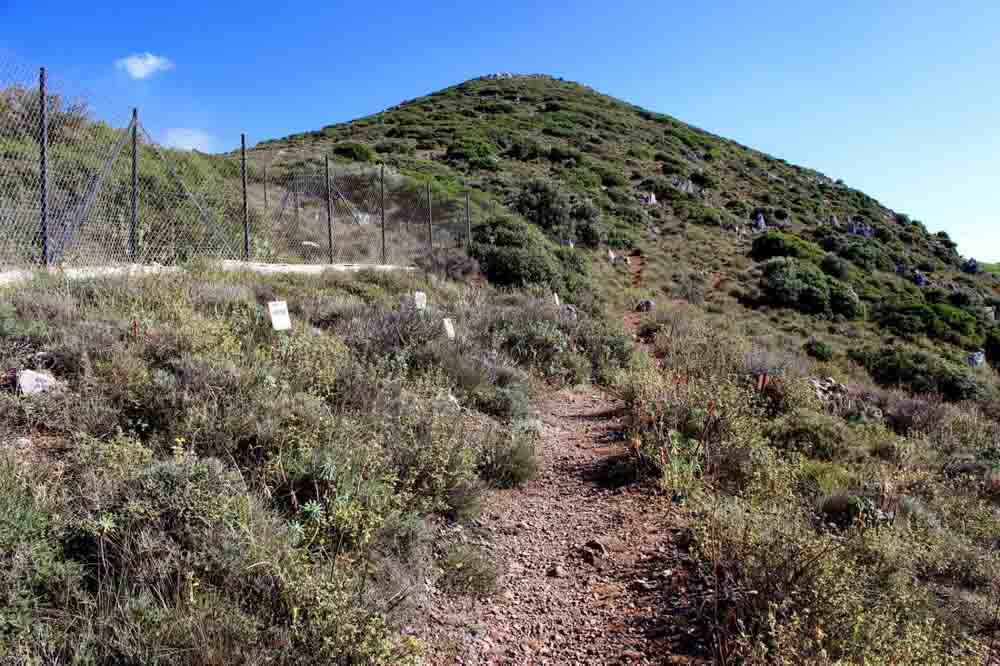 Anemospilia is fenced off and closed to the public. There is very little to see except the foundations of three narrow rooms, overgrown with weeds. It is a place to visit and think about the story, to wonder whether the peace-loving Minoans actually committed such acts, rather than a place to marvel at what remains.

Grand view that feeds the soul and Icarus

This breathtaking view feeds the soul - have a look at the terrain of Crete. Juktas is the main landmark, controlling the valleys of Pediada, Mesara and Temenos. Mount is also home to 40 species of birds, the most important being the griffon vulture, which uses the mountain as its nesting and mating ground.​

It is also said that when the mythological Daedalus was imprisoned by King Minos in the Labyrinth at Knossos, he fashioned wings of feathers and wax with which to escape. He made two pairs, one for himself and one for his son Icarus. He warned Icarus that flying too near the sun would cause the was to melt and the wings to disintegrate, but Icarus did not heed this advice. He may have achieved the altitude of Mount Juktas before he came crashing down into the sea. 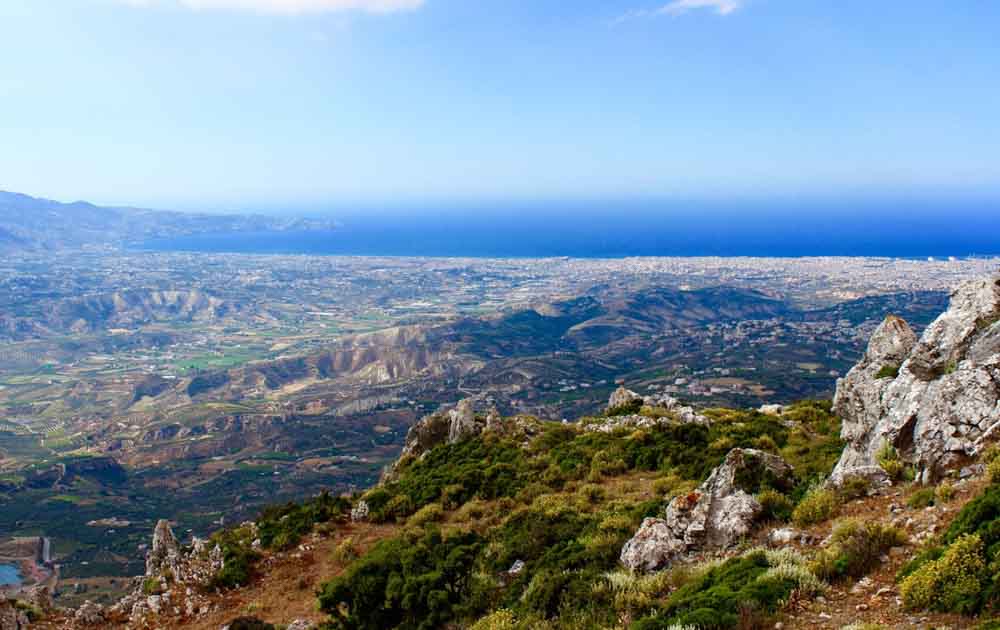 Like any place, Mount Juktas it comes to life through the storytelling and appreciation of history and mountains significance - there is so much more than the eye meets when travelling with a good storyteller.